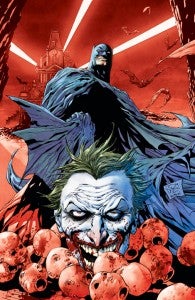 DC's blog is a routine stop for many fans, but often it doesn't hold much interest for retailers; they rarely break big stories there, after all, and it's mostly just press releases and teaser art. With the New 52 relaunch, though, DC's blog has been the first place for fans, retailers and journalist alike to get confirmation as to what books are going back to press. Which, at this point, seems to be pretty much all of them.

Yesterday, The Source announced that both Action Comics #1 and Batgirl #1 were going back to press for third printings. While in the case of Batgirl it may be at least partially that it was under-ordered a little at the retail level, Action Comics crossed the 200,000 with its second printing. A third printing puts it right up there with Justice League, which is also on its third printing, as the two highest-selling American superhero issues of the year.

The same blog post that trumpeted Justice League as the top seller of the year announced that all 13 of last week's issues, as well as all 13 of this week's, have sold out through Diamond Comics Distributors and will go back for second printings. After better-than-expected sales last week, all of this week's comics were sold out through Diamond before they hit the stands yesterday morning, said DC.

According to DC, these sell-outs are happening in spite of large print runs; Action Comics, Batgirl, Batman, Batman and Robin, Batman: The Dark Knight, Detective Comics, Flash, Green Lantern and Superman all have at least 100,000 copies already printed or in circulation.

All of these numbers include variants or additional prints, but none include digital; early indications are that digital sales have been stronger than expected, with both Comixology's and DC's apps being in the top-10 highest grossing apps on iTunes last week, during the first major week of the relaunch. It's worth noting that in spite of apparently aggressive online purchasing (I myself bought 8 of the first 13 issues on Comixology, plus Justice League #1), the hard copies continue to go back to press, suggesting that the effect of digital on the direct market is thus far negligible.