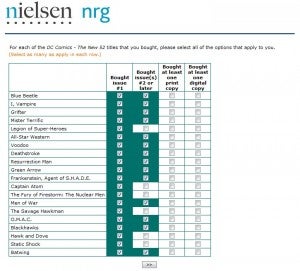 In a new survey commissioned by DC Comics and carried out by Nielsen (yeah, the TV ratings people), the company asks first about its full line of New 52 superhero titles--both the first wave ones that have been cancelled as well as the ones currently in print--and then about a smaller, more specific group of titles.

That second group of titles, you see, is populated by a number of comics that were cancelled (or, as the survey calls it, "retired" and replaced) during one of the first two waves of  changes to the line. The rest of them? Well, let's just say they're titles that wouldn't have surprised anyone if they had been part of one of those waves.

The list seen at left represents the group of titles that Nielsen asks you to talk about if you select that you bought nearly every one of DC's books, including all 52 of the original titles. Of the twenty comics listed, nine of them have already been cancelled and of the ten titles cancelled so far since the New 52 initiative began, only Justice League International is not on the list. Justice League International, of course, is rumored to have a facelift in the works and will likely not remain cancelled long-term.

If you remove the nine cancelled titles from the list, you're left with:

That's hardly a list of titles that are setting the sales charts on fire, in spite of very strong reviews for some of them. I, Vampire and All-Star Western have been among the best-reviewed comics since the relaunch, but have still regularly sold below the level that Justice League International, a cancelled title, was selling at in the same month. Major creative changes have been made to virtually every other title on the list, some more than once. The three Rob Liefeld titles are all on the list, along with the absolutely dreadful Firestorm book, the directionless Blue Beetle and Legion of Super-Heroes titles and a Green Arrow title that has had trouble hanging onto a creative team literally since midway through its first arc.

With some rumors suggesting that the third wave of New 52 titles was originally meant to be larger, and more of the existing books cancelled by extension, it's interesting to look at this list and speculate how many of them will still be around in six months. By the time the second issues of DC's Second Wave titles were on the stands, the next batch of launches and cancellations had already been announced. With San Diego Comic-Con around the corner, it wouldn't be too difficult to believe this survey is being factored in to see which of the above books might be under the gun if DC has a few major announcements to make at the show. Legion of Super-Heroes would seem to be the only one on this list that's certifiably safe, and even that might have to undergo a radical facelift if things don't improve soon. Rumors before the zero issues were announced had Keith Giffen taking over the book in September, but instead he's headed to Blue Beetle to work on a character he helped create.

What do you think? Which of these titles will be cancelled to make way for the fourth wave? My guess is more than this time around;  if I had to lay money down on one side or the other, I'd say of the eleven listed, only Hawkman, Green Arrow, Legion and Jonah Hex are guaranteed a book in six months...and even those might be decidedly different than what's on the market now.

DC Comics' Nielsen Survey: Will These Be Cancelled Next?

Amazon Drops a One-Day Holiday Sale on Board Games