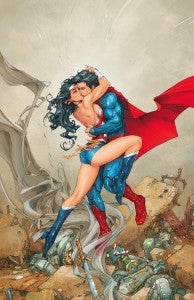 Ahead of the rest of the February solicitations, DC Entertainment have announced that they will revive the long-dormant comic book series Young Romance as a special Valentine's Day one-shot.

Young Romance: A New 52 Valentine's Day Special will not focus particularly on DC's teenage superheroes, currently being published under the "Young Justice" family of titles for the New 52. Rather, the cover as featured on DC's blog features DC editorial's favorite couple du jour, Superman and Wonder Woman.

Superman and Wonder Woman, fresh off their best-selling lip-lock on the cover of Justice League #12, may be a big part of what DC Comics is counting on to make this issue sell, considering that neither anthology titles, romance titles or holiday specials are exactly a guaranteed hit in today's comics market.

Given the fact that Apollo, Midnighter and Batwoman are all homosexual characters, there's a better-than-zero chance that social conservatives will get up in arms about the issue; expect One Million Moms to take aim at this comic, unless they're uncharacteristically chastened by the drubbing they took from Green Lantern supporters.

Young Romance originally launched in 1947 from Prize Comics, but when the publisher stopped making comics in the '60s, DC bought up the rights to a number of their titles, including Young Romance which continued until 1975.