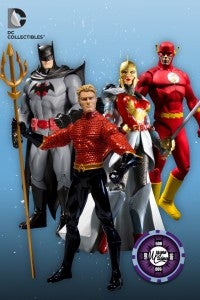 DC Entertainment's toy division is not playing around. In a move that's sure to send waves of nausea through the comics direct market, DC Comics announced changes to their high-end collectible toy division today via their blog. Previously named DC Direct and available only to direct market comic book retailers (although the toys would inevitably end up available for home delivery through sites such as Amazon and eBay, where customers and retailers can sell more or less anything they own), the company will be rebranded as DC Collectibles, and will feature an expanded online store where fans can not only buy the same figures they can in comic shops (and presumably other retailers), but also exclusives made for the DC Collectibles Store. "Not all of our fans have access to comic book retail locations, so by expanding our website to offer the entire product line, we're adding an element of convenience and the ability for fans to collect every single product they're interested in," Hank Kanalz, senior vice president of digital, DC Entertainment, said in a statement at the DC blog. First up for the exclusive treatment is the Flashpoint box set, seen at left, which includes the Flashpoint action figures based on The Flash, Wonder Woman and Batman as well as a previously-unreleased Emperor Aquaman toy and a Wayne Casinos $500 chip. Soon thereafter, DC said that fans should expect a Green Lantern: Blackest Night bust set featuring Hal Jordan and Sinestro. DC Entertainment Chief Creative Officer (and Flashpoint, Aquaman and Green Lantern writer) Geoff Johns will moderate a panel at this weekend's Chicago Comics and Entertainment Expo (C2E2) which will allow fans and retailers to ask their first questions about the restructured company.

DC Direct Rebrands as DC Collectibles, Will Be Available Online

Marvel to Explore Hulk's Origin Story Through a Found-Footage Documentary