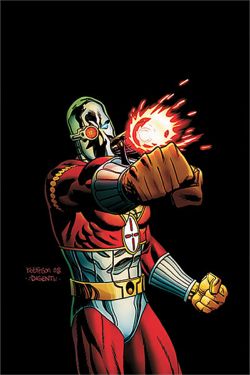 could have been taking a page from Marvel with their focus on the villainy of their universe with the January Faces of Evil specials, but they're taking it in a different direction by using these issues to either tell the story from the baddie's point of view and/or displaying what their role in their nemesis' life is.

With several major titles and smaller ones taking part, a massive amount of reading is to be done! Below is a review of six of the issues with another review on the way, rated on a scale of 1-6, one being meek and mild, six being really rotten.

Secret Six #5: Deadshot - It seems odd that DC would choose to highlight a villain in a book that's already about villains, but Deadshot gets to narrate the action in this month's issue. Although his narration is an interesting change from the series' usual storytelling, it's not much more than a "so?". A villain-driven series has to do a bit more than add narration from one of it's characters, that doesn't add much to what we already knew of Deadshot, by the way. Plus, the biggest shock of the issue had nothing to do with Deadshot. All in all, pretty unscary: Terror Scale Score: 1

Poor little rich boy Tommy Elliot displays some pretty brazen behavior in this issue, thanks to Paul Dini, and immediately he gets under your skin more than usual. No more than four pages in, this issue, told mostly in Hush's own words, shows not only the depth of his hatred for Bruce Wayne, but also the power that Bruce Wayne possesses socially as Eliot impersonates him. What proceeds is a sprawling trip around the world, with Elliot determined to get back the life he thinks he deserves. The end of the issue will make you count down the days until the follow-up. Terror Scale Score: 6

- Hmmm…what to make of this issue? For a character we only met a couple of issues ago, it's a bit surprising that DC goes with Superwoman for a Faces of Evil story. Still, she has served as an interesting match up with Supergirl, in both strength and a sense of duty. How sinister is her duty? How long until the pieces of the death of Agent Liberty are put together? Is she working for Luthor? Who knows, but her mystery, power and interest in Kandor/New Krypton could prove to be quite a sinister (misguided?) foil for Supergirl. On the sinister scale though? This issue isn't quite there. Terror Scale Score: 3

The fact that Luthor is shown from the very beginning of this issue, no matter how briefly, scheming from the safety of a laboratory, far away from the scene of battle, sets him squarely in his element; a perfect choice for his Faces of Evil issue. Although much of the issue deals with the results of New Krypton's prominence and population, Luthor does what Luthor does best: plot and scheme, his invisibles fingers all over the peril the heroes in this issue find themselves in. Terror Scale Score: 4

Birds of Prey #126: Calculator - Not really known for his physical prowess, but certainly

the most tenacious and, sorry, calculating foe of Oracle's Birds of Prey, Calculator doesn't intimidate you physically. From seeing his angle of the world in this next to last issue of Birds of Prey, you get to see what makes him truly a force: his cunning mind. From creating a "hidden" internet to balancing his potion between the Silicone Syndicate and Oracle, Calculator takes the reader into the depths of his world and shows us why he is always able to project a slippery way out of any situation. Terror Scale Score: 6

Wonder Woman #28: Cheetah - Much like her namesake, Cheetah is sleek and silent,

lurking in the background but not delivering the killing blow until necessary. As Wonder Woman battles against one of her toughest foes ever, Genocide (no really), Cheetah emerges to play her hand. With simply uttering, "checkmate", we're taken to a scene of a massive explosion where several DC heroes are located at the site of the battle. Realizing that the Cheetah has had a hand in arranging all of this, although she appears briefly in the issue, we're reminded that she is always deadly. Terror Scale Score: 4