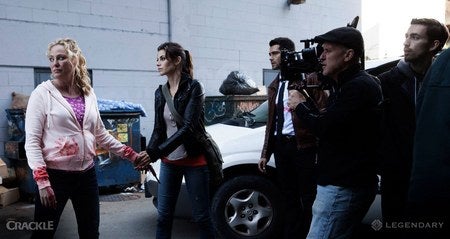 The zombies of "Dead Rising" have even more actors to munch on now.

Legendary Pictures and Crackle Productions have announced the full cast lineup for their upcoming Dead Rising: Watchtower, a film adaptation of the popular zombie survival video game. Rob Riggle, Harley Morenstein, Keegan Connor Tracy, and Aleks Paunovic will join previously cast Jesse Metcalfe, Meghan Ory, Virginia Madsen and Dennis Haysbert in their struggle against the Undead's growing hordes. The image, above, is the first official photo of the entire cast assembled together.

Dead Rising: Watchtower chronicles the zombie virus outbreak that's consuming America. As government-issued vaccines fail to stop the disease's spread, the film's four leads dig to find the virus' origins while remaining uninfected. With all signs pointing towards a larger government conspiracy, it dawns on the group that the undead may be the least of humanity's problems.

Rob Riggle and Keegan Connor Tracy will star as journalists covering the zombie outbreak. While Riggle is a hardened photojournalist with years of experience, Tracy will play a more naïve reporter. Harley Morenstein and Keegan Tracy will take much tougher roles as members of a criminal biker gang, with Morenstein as the gang's leader, and Tracy as his right-hand man.

Dead Rising: Watchtower debuts next year as a feature film before being broken into separate episodes for a home video release.