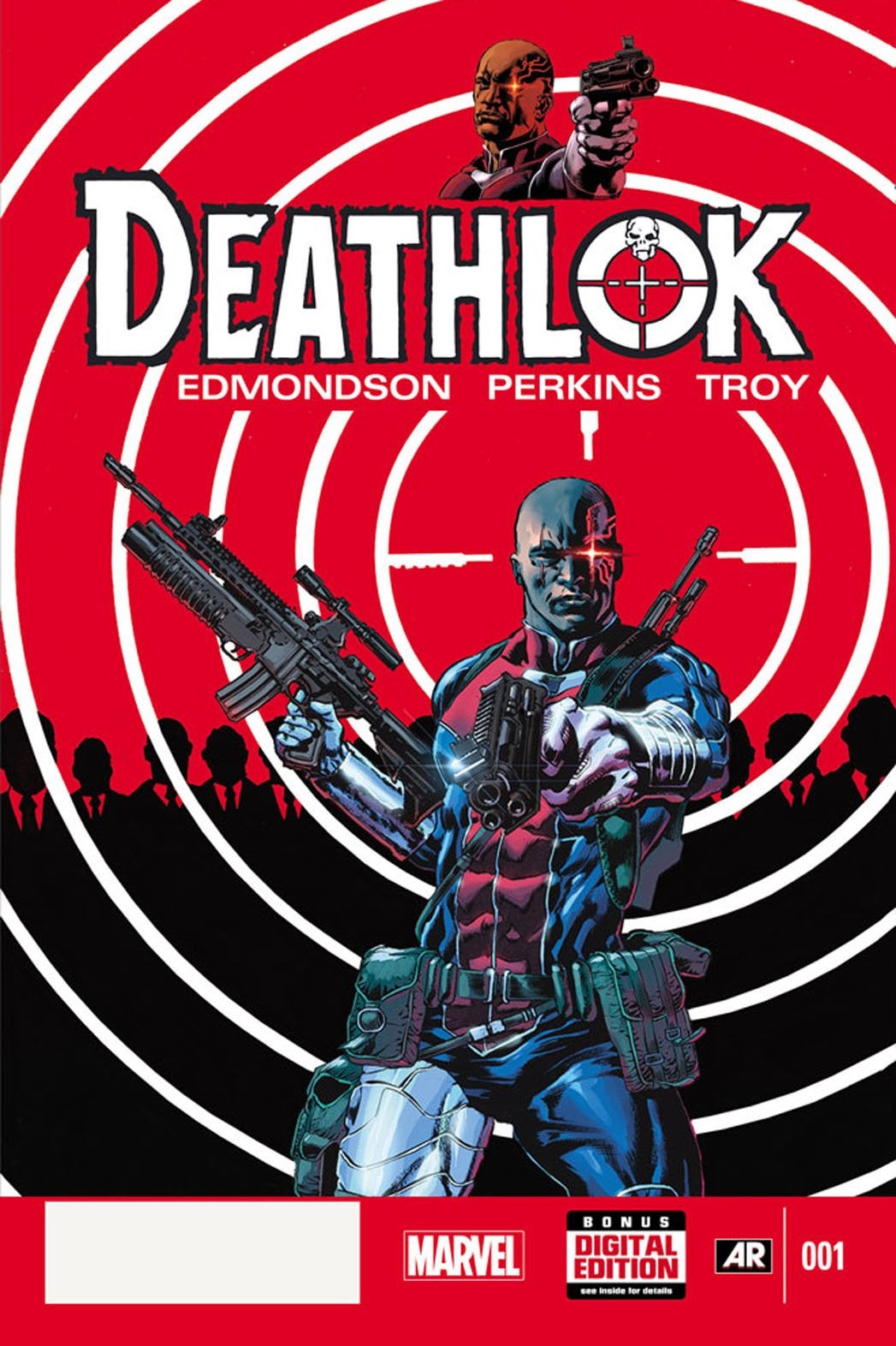 Marvel is giving the character Deathlok another series after his appearance on Agents of SHIELD last fall, this time being written by Nathan Edmondson and drawn by Mike Perkins. The team is a good fit for the morally gray, hyper violent, and high concept character. Edmondson has shown that he excels with these sorts of narratives in Marvel’s newest volumes of Black Widow and The Punisher, as well as his creator owned work like Who Is Jake Ellis?. Perkins’ work with Ed Brubaker on Captain America has shown his knack for the spy genre as well.

Deathlok #1 is plotted in a similar style to Edmondson’s other Marvel work. It’s a relatively self-contained story that introduces a much broader premise. Over the course of twenty pages Deathlok goes on multiple missions, two antagonistic groups are introduced, and the comic’s central twist is revealed. There’s a lot to take in and Edmondson presents it all in a manner that never feels rushed. Readers who dislike decompression are bound to love his plotting.

The characters introduced throughout the issue left me feeling cold though. Deathlok is intended to be an emotionless killing machine, but his alter ego Henry Hayes is a caring father. Yet there’s no emotional hook. The fact that he seems like a decent fellow and that he has a daughter is treated as being sufficient reasons for readers to invest in him. There’s nothing uniquely compelling about that situation; plenty of men are nice fathers. The supporting cast does not provide anything to respond to either. Agents of SHIELD and another organization act as mysterious ciphers and Henry’s daughter is a clichéd teenager.

Perkins provides some excellent work in Deathlok #1. His figures are consistent and that is a feat for the complex new Deathlok costume. There is a page composition towards the end of the issue where Deathlok is attacking a crowd that is an excellent example of how to quickly move through action beats. Large panels of the crowd are juxtaposed with smaller panels of Deathlok. The pairings create a clear cause-and-effect correlation that matches the rhythm of his gunfire when repeated down the page. Perkins’ work in creating those sorts of connections extends to quieter moments as well. He adds details to inform readers about the subtle effects of Deathlok upon Henry and how his transformation takes place.

There are uneven moments in Perkins’ action sequences, however. The comic opens with Deathlok attacking a train. After breaking into the train and killing his target, he separates and derails some of the cars. The problem is that, even upon re-reading the pages multiple times, it’s never clear which cars the action took place in and which were sent off the rails. It’s safe to assume that the derailed cars were the ones he entered (why would he derail the rest?), but the lack of clarity in the art calls this into question and creates an unnecessary obstacle for readers. A similar problem arises during the second action sequence of the comic when the distance between Deathlok and his targets is radically altered between pages, bringing into question his placement throughout the first several panels. Action sequences rely on clarity and there is an occasional lack of it in this issue.

Deathlok #1 is a generally competent comic book. Edmondson includes a lot of information in a twenty-page script and it all combines into a tight plot. Perkins action is often exciting. There’s not a hook to any of these characters yet and the sequences sometimes fail to relate important information. The result is a mixed bag, one that could develop into a great series, but is hard to recommend based on this issue alone.