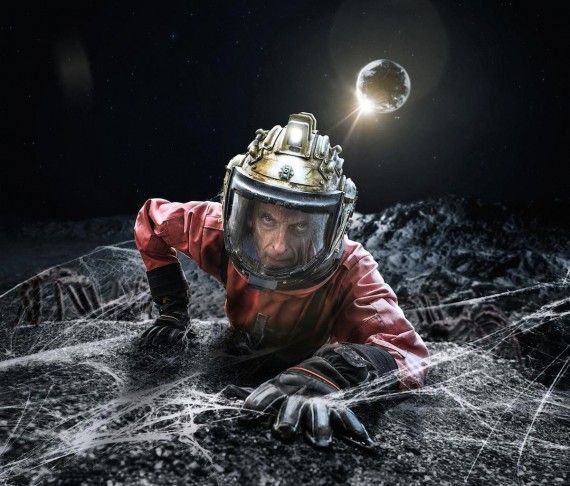 Clara is sending a transmission to Earth from the moon in the year 2049. She says the man who normally helps is gone and may never come back. Courtney She says they have to decide between saving an innocent life and the future of life on Earth and they have 45 minutes to decide.

The narrative goes back to Earth. Clara is talking to the Doctor about how Courtney has been acting out. The Doctor told Courtney she’s not special, and she’s been angry about it. The Doctor offers to make Courtney the first woman on the moon, and she agrees.

They travel in the TARDIS to 2049 and find themselves on a shuttle full of nuclear bombs on their way to the moon. The shuttles land and The Doctor and his companions are found and questions by some astronauts. The Doctor begins moving around oddly to test gravity and then suggests that maybe the astronauts shouldn’t shoot him because he’s a super intelligent alien who might be able to help them. He pulls out a yo-yo and wants to know why it’s going up and down. There’s gravity on the moon. He says the moon as put on weight and that it could be any number of reasons why,, but that it threatens to cause massive tidal waves on Earth. They believe its alien and plan to blow it up because that’s what you do on earth.

They begin searching and the lead astronaut explaining that something happened on the moon as they explore some kind of outpost. She says whatever happened caused high tide all over the planet at once, the biggest natural disaster in history. An astronaut seems confused about how the equipment works. The leader says they’re third hand astronauts with a second hand ship.

They explain that whatever happened was ten years ago, when a Mexican expedition came looking for minerals to mine. They had no shuttle to get to them with, except the one in a museum. Clara checks in with Courtney. The Doctor gets the lights on in the station. One of the other astronauts outside is attacked by something.

The lights go out in the station and they begin hearing noises. They try to get the door open, but its locked. The Doctor tells everyone to stand still because the creatures senses movement. He tells them to move slowly, but one of the other astronauts come downstairs and gets attacked by a spider-like creature. Courntney gets left behind as the gravity leave and she begins to float. The gravity vanishes again and she falls and uses cleaning solution spay the spider to death. The door opens and the rest come back in. Courtney want sto go home.

They begin tracking across the moon, The Doctor remaining insensitive to Courtney’s worries. Clara says she’s been to the future and the moon is still there, so there’s nothing to worry about. The Doctor says he can’t be sure, that he can’t see certain moments in time. They’re blurry or grey because they’re big things that haven’t been decided yet. The Doctor says they need to decide, but the lead astronaut says no, there isn’t anyone else left so she’s setting off the nukes and they’re all going to help.

The Doctor says the moon is dying. They find another of the creatures. Sunlight sends it skittering away. They look in the crevice it came from and find a lot more. The Doctor discovers amniotic fluid on the moon and leaps in.

The three humans have a discussion about what to do, with the astronaut describing the creature as a parasite. She pushes a trigger. They get a transmission from ground control on earth. Clara uses the satellite transmission to broadcast back to earth. Clara broadcasts for the people of Earth to vote with their lights: on for live, off for kill it.

As the station begins coming apart, the group rushes to the window to see the Earth. As most of the 45 minutes pass, the Earth goes dark. At the last moment, Clara aborts the detonation and the Doctor shows up ad takes them into the TARDIS. He brings them to Earth to watch as the moon hatches, the creature flies away, and the moon-shell dissipates. The Doctor looks into humanities future, and sees it spread throughout the universe, all because it saw a great moment of life in the sky in the year 2049. They look and see that the creature left another moon-egg behind.

When they return home on the TARDIS, Clara shoves off Courtney and demands answers from the Doctor. The Doctor talks about how special Courtney is now, but Clara is angry and crying. She says his behavior was patronizing. They argue until she tells him to go off in the TARDIS and not come back.

Clara goes back into the school and tells Danny all about what happened. Danny compares what the Doctor did to what he experienced in the army. She says she’s done, but Danny says she’s too angry to mean that yet. Clara asks how he got to be so wise, and Danny says he had a really bad day.

At home, Clara gazes at the moon.

Doctor Who Series 8 Episode 7: Kill The Moon Recap With Spoilers