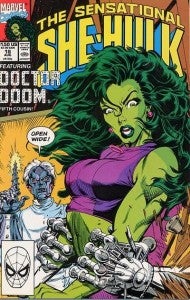 It's been a while, but one of our recurring features is back after a long hiatus! I'm happy to release this edition of my Dollar Bin Discoveries as a comeback of sorts, a trip back to one of my favorite things to write here at comicbook.com! For those unfamiliar, I scrounge around in one the best places of any comic book store, the "dollar bin". That place of hidden treasures, multiple copies of Superman #75, and a host of other things to make you shudder, chuckle, regret what you spent or rejoice at the hidden treasure you've found! I select a comic and then rate it based on whether it's worth only .25 or perhaps the whole dollar spent for it. This installment focuses on one of the more interesting and bizarre Marvel series over the years, The Sensational She-Hulk.

The series, the second focusing on the adventures (and in this volume's case misadventures) of the Hulk's cousin, took on a tongue in cheek approach, having the character often break the fourth wall and poke fun at common comic book tropes, such as guest stars and crazy plots. The series had its hits and misses, and in the case of today's Dollar Bin Discovery, a famous super-villain's distant fifth cousin tries his hand at villainy with odd results. Let's find out how the issue did!

The Book: The Sensational She-Hulk #18

Summary: Our story opens with She-Hulk Jennifer Walters getting some much needed rest after several escapades in previous issues, with Howard the Duck even, and her dreaming of a romantic getaway on the beach, which gets hilariously interrupted by a robot named DAVE who attempts to corrects Shulkie's behavior with her fantasy man in order to preserve her role model status. Upon waking she discovers from her assistant Weezie that someone has contacted her regarding a dental malpractice suit, even though she hasn't officially opened her law practice yet. Needing money, a girl's gotta eat after all, she agrees to meet with the man. He discovers that a strange implement has been placed in his mouth and She-Hulk quickly seeks to identify the dentist in question who turns out to be Dr. Doom. No not the vain and powerful ruler of Latveria but his his fifth cousin, Bob Doom, D.D.S.

After serving the dentist with papers, we learn that Bob is well aware of his position in the world, especially in contrast to what he sees as his much more successful cousin, and that a malpractice suit could ruin him forever. What follows is a slightly hilarious/pitiful burst of outrage and contempt from the dentist that results in him creating a mask similar to his cousin's and a plot involving dental implants that control the minds of wealthy clients. And did I mention an evil dental chair? Yeah, that's here as well. After Doom's wealthy clients transfer the care of their estates to him, via some root canal mind control, of course, She-Hulk smells trouble, coupled with the fact that her client has agreed to a large settlement and she is off to the doctor's house, convinced that anyone named Doom, "doesn't get beaten this easily."

She-Hulk shows up at Doom's house, the center of what he hopes will be New Latveria (you know, what we already call New Jersey, New York and Connecticut anyway), to confront him, only to be captured by a machine and a laughably absurd Dr. Doom costume with a dental twist. After dodging the threat of an adamantium drill bit, She-Hulk quickly dispatches the good doctor, saving the day for the wealthy patients and shoring up some sweet new legal clients as well.

Issue Worth? One of the reasons this incarnation of She-Hulk was so popular was that it didn't take itself too seriously. Often, the stories balanced a good sense of action with camp and self-awareness, something hard to do in any medium. If you add in the ridiculousness of Dr. Doom D.D.S (who is so close to being a 1960's villain for the Batman television series it isn't funny) you have one of the best examples of the book at work. You can't help but laugh at characters and the refreshing way She-Hulk wanders through her fictional universe. Final Value: $1.00