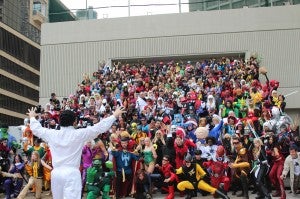 I'm not certain who took this, although Feeding Ground artist Michael Lapinski posted it to Facebook, where it's credited to podcaster Pat Loika. In any case, it's one of the more truly epic pieces of comics cosplay I've ever seen, anywhere, and it was apparently taken over the weekend at this year's Dragon Con.

Featuring what appears to be somewhere upwards of 150 cosplayers as Marvel heroes and villains facing off against The Beyonder, this image is not entirely outside of his wheelhouse. The Beyonder, one of Marvel's most powerful cosmic villains, has squared off against dozens of characters in stories like Secret Wars II and Beyond!.

This image is just stunning, in terms of its scope and its wow factor. There's everything from the store-bought costumes to the semi-professional standing shoulder-to-shoulder, and a great variety of characters, including The Avengers, The Guardians of the Galaxy and a handful that I frankly can't identify at first glance.