Does there exist a more threatened group of people than those who inhabit the earths and universes of our beloved comic book heroes and villains? What other fictional population seems to live under the constant threat that at any given point their world could be turned into zombies, an earthquake may shut down the city, or that their universe may cease to exist altogether!? The past few decades have seen several major disasters, manmade, natural and perhaps supernatural, that have caused devastation and damage beyond the norm for several comic book universes. Here, in no particular order, are ten of the most memorable and, pardon the pun, earth-shaking disasters and crises to hit the comic book populace.

1. The Earth Appears Overrun with Zombies in The Walking Dead Talk about a rude awakening! When police officer Rick Grimes woke up in a hospital after being in a coma, he found the world he once knew gone, replaced by an innumerable sea of zombies, with human survivors few and far between. What follows his revelation in this Robert Kirkman penned series is a survival tale unlike any other, as Grimes and his fellow survivors band together to try and live in a world hit by a catastrophe that still, even over sixty issues into the series, has yet to be fully explained or understood. Unlike other disasters, this one does not appear to be temporary nor does it seem to have any hope of rest for our human protagonists!

2. The Destruction of Bludhaven in Infinite Crisis DC Comics has pulled some pretty staggering stunts during their many company-wide events over the years (some of which we'll revisit in this article). One moment that readers of 2005's Infinite Crisis will remember is the destruction of the city of Bludhaven, home to the hero Nightwing. The villain Chemo, a contained mass of chemical and toxic waste, was dropped on the city by villain Lex Luthor's Secret Society, much like a major bomb would have been. The results were horrific, as hundreds of thousands of the city's residents were killed or severely injured by the bile from Chemo's body. Attacking superheroes is one thing, destroying a city of innocents is another.

3. The Explosion in Stamford, Connecticut While the destruction of this event in issue number one of Marvel's Civil War was not on the scale of what happened in Bludhaven, the emotions and ramifications of this tragedy ignited one of the biggest storylines in Marvel's history. Over 600 people, 60 elementary school children included, lost their lives when the TV-mugging New Warriors launched a surprise attack on several B and C-list villains, namely Nitro among them. During the battle, Nitro's explosive powers caused the destruction of all those civilian lives, along with most of the New Warriors. The battle cry for superheroes to register with the government was heard, lines were drawn, and the Marvel characters have never been the same.

4. A Massive Plague Kills all Men Something wicked came the way of every male mammal on earth on the date of July 17, 2002. On this day, an unexplained plague wiped out anything carrying a Y chromosome, all except for one man, Yorick Brown, for who the series Y the Last Man gets its name, and his male monkey Ampersand. What follows in this sixty-issue Brian K. Vaughn series is a tale of a world with only one man and a world full of women who are struggling in many cases to regroup and cope with the fact that the world is doomed to extinction. With everyone looking to Yorick for a possible answer/cure/explanation, the series did a masterful job at examining survivor's guilt while also showing how life has to go on in the face of epic destruction.

5. An Earthquake Destroys Gotham City Residents of Batman's home town have seen it all over the past sixty-plus years, mostly in the form of supervillain-induced mayhem. Nothing could have prepared them for what DC editors had in mind in 1999 when a massive earthquake brought the city to its knees in the No Man's Land stories. Cut off from the United States, Gotham City was carved up by gangs and villains, with Batman and his team of Bat-family members left to work with police in reclaiming the city and helping the survivors. The storyline lasted over a year, with Gotham finally getting rebuilt in the process and two notable characters making their debuts: Cassandra Cain as Batgirl and Harley Quinn, the Joker's equally insane assistant.

6. The Mutant Massacre of the Morlocks Possibly one of the most disturbing and malicious events in comics, the Mutant Massacre storyline, which ran through the X-Men titles in 1986, displayed the ruthless murder of dozens upon dozens of Morlocks, a group of mutants who lived in their own underground community, away from contact with others. Perpetuated by the Marauders, mutants themselves, the killings prompted action by the X-Men, X-Factor and Thor, who each worked to stop the Marauders before they could kill off the remaining Morlocks. While the actual details and specifics behind the killings remain grisly, this is one fictionalized account of mass murder that eerily represents modern parallels to hate crimes and acts of violence against minorities.

7. Faked Alien Invasion in New York City The seminal work Watchmen was intended to reflect modern thoughts on superheroes, nuclear war and the implications that doomsday was around the corner when it was released in 1986. Part of the plot involves imminent nuclear war between the United States and Soviet Union, something that "hero"(?) Adrian Veidt, known as Ozymandias, hopes to avoid by causing an "alien invasion" to take place in New York City. Part of his plan involves killing a large portion of the city, all in the hope that it will cause a cease fire between the two nations so they can address this potential common threat from outer space. He executes this plan, and along with it almost half the city of New York in the process. His twisted logic does result in the deescalation of the nuclear threat, however. 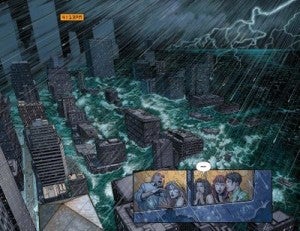 8. The Ultimatum Wave It seems oddly fitting that this series of catastrophes hit the books of Marvel's Ultimate universe, as there are few other examples of destruction and death that are so, well, ultimate! New York can't catch a break this time either, as Magneto, the main mastermind behind the Ultimatum attacks, launches a massive series of electrical storms and tidal waves that wreak havoc on the city. What follows next is a series of deaths for both heroes and villains, the body count for the series soon up to staggering numbers. A good portion of the Ultimate X-Men die, several members of the Ultimates, and let's not forget Doctor Doom and Magneto. A devastated world begins picking up the pieces after this, and thus, Ultimate Comics was born.

9. The Genocide of Bialya's Population Black Adam has been a complicated figure for DC ever since his debut in the 1940's as a villain for the Marvel Family. He's been hero, villain, leader of a nation and more, but his actions during the weekly maxi-series 52 added another title: mass-murderer. Seeking to hunt down the horseman Death for his role in killing his family, Adam kills millions in the country of Bialya, whose leaders had served as the house for the technologically created Horsemen. Others are killed in Adam's wake, in China, Italy and other points around the world. Black Adam's rage is only quelled by magic, but by that point his murderous rampage had already made a dent in Earth's population. 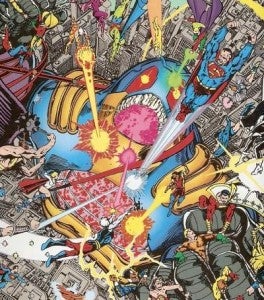 10. Crisis on Infinite Earths The term "earth-shattering" was more than just a turn of phrase in this mid-1980s' DC storyline. Created to eliminate inconsistencies and to streamline continuity in the DCU, Crisis brought us the Anti-Monitor, a being of massive power whose antimatter powers were destroying untold number of Earths. It took the combined effort of several Earths' heroes to stop the Anti-Monitor and avoid the destruction the villain sought to bring about. In the process of staving him off, several notable heroes lost their lives, the Silver Age Flash (Barry Allen) and Supergirl. In the end the surviving Earths were merged into one where everything seemed to finally make sense, but not before countless other worlds and people were destroyed.