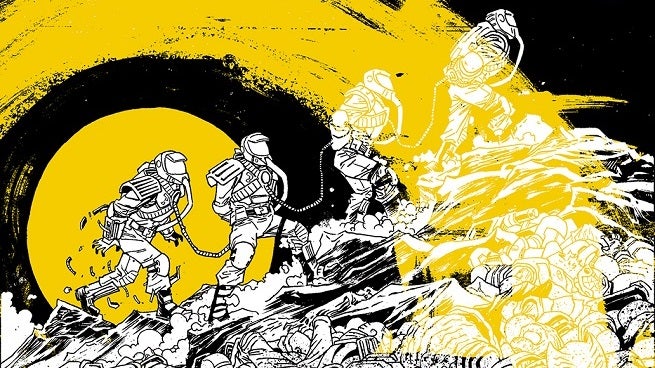 Due out next month from BOOM! Studios, writer Ed Brisson and artist Damian Couceiro's Cluster has been likened to The Dirty Dozen in space. Following an arrest for a DUI offense that caused the death of her passenger, the daughter of a powerful politician avoids the built-in advantages the system gives her in favor of a guilty plea and a pledge to serve 15 years as a soldier in deep space -- a gig from which most people never return.

It's a smart, subversive and fun piece of sci-fi action that feels a little like the bastard child of Blade Runner, Guardians of the Galaxy and War, Inc.

If Ben Kinsley's character in War, Inc. was a green, bug-eyed monster.

The Final Order Cutoff for Cluster is today, so if you want one, contact your local comic shop now. The first issue ships February 4. 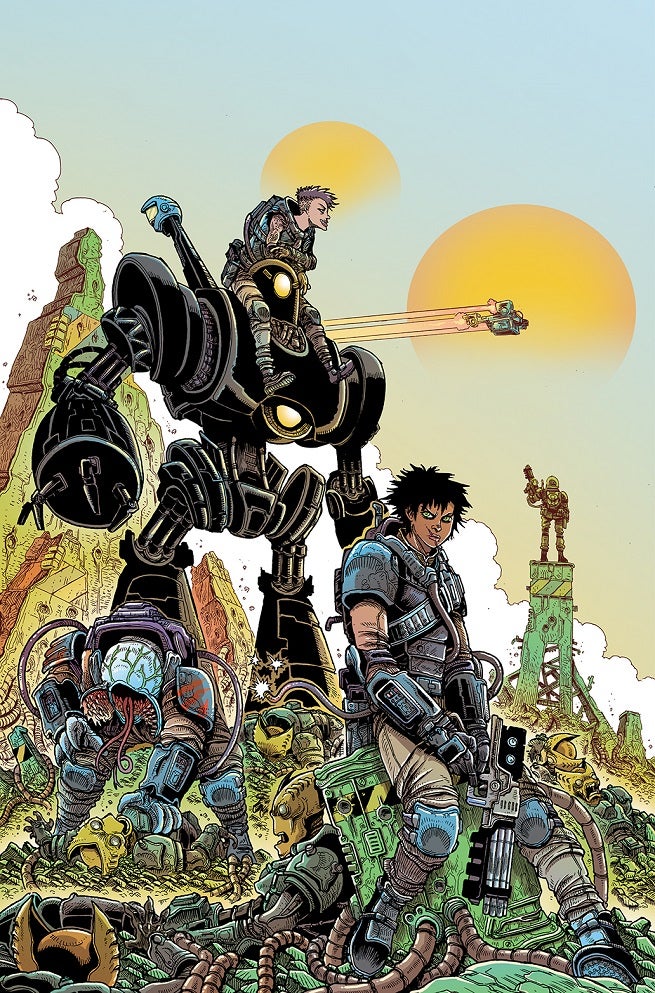 Obviously you've worked all over the place and your work is in demand. How did you end up at BOOM! With this one?

I've been talking to the folks at BOOM! since at least 2013. Actually, I just looked it up, since May 2013. Right around the time that my first published series Comeback (Image) had wrapped up. I'd been talking to [editor] Eric [Harburn] about the possibility of pitching some projects with them and was excited to do so; I'd read a lot of what they'd put out and they were obviously trying to make big strides in creator owned comics. During the time that I was pitching ideas, I got approached to write Sons of Anarchy. A large part of why I came onto the book, aside from being a fan of the show, was that I really liked Damian Couceiro's work. He and I had actually pitched books together about 10 years ago. He was the first artist that I ever worked on anything with—even if it never ended up going anywhere. So, yeah, I came to do Sons so that he and I could finally do some published work together.

During that time, I was developing an idea for Cluster. It was a mixture of a new concept and an idea that had been percolating in my head since I was in high school. I was sitting down working on the idea one day, and thought, "Damian would be great on this!" and then, I kid you not, about 30 minutes later, I get an e-mail from Eric asking if I'd be interested in working on a creator-owned book with Damian, post-Sons, and did I have any ideas? It's like it was meant to be.

The first issue is pretty brutal. Are there any characters that in your head you think are "safe" for a while?

No one is safe. Ever. 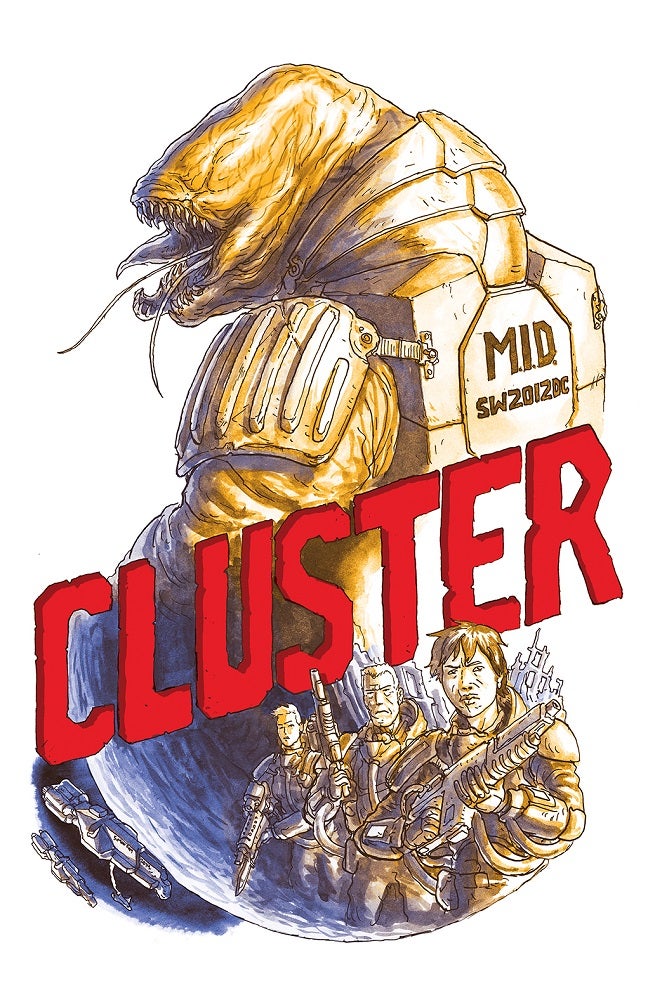 There are a lot of stories right now, it seems, where the central authority is very brutal and people are treated like animals. It's a classic story, but recently it seems very prevalent in mainstream fiction whereas in the past it feels like it's been rather ghettoized. Why do you think that is?

Whenever there seems to be a mistrust of government or country, you start to see these stories become more prevalent. Right now, I feel like there's a cultural and societal divide in North America that you haven't really seen since the '80s, which is also the last time that these types of stories seemed to be popular.

Right now, we're living in a time where the news is equal parts police brutality, terrorism, and the NSA spying on US citizens. You can understand why society as a whole would have a complete distrust of authority and those who're supposed to be there to defend. In a climate such as this, people tend to turn to media that's going to speak to them.

Your main character starts out and is not particularly sympathetic in the first few pages. Was that something you did to kind of challenge yourself, or were you depending on the juxtaposition of her reaction and the police reaction to persuade people to side with her?

No. I think that Samara starts out stoically, which is how I've always envisioned her. As the story progresses, we'll get to see what makes her tick, but she's all business. She's there to pay for her crime and isn't going to whine about it. 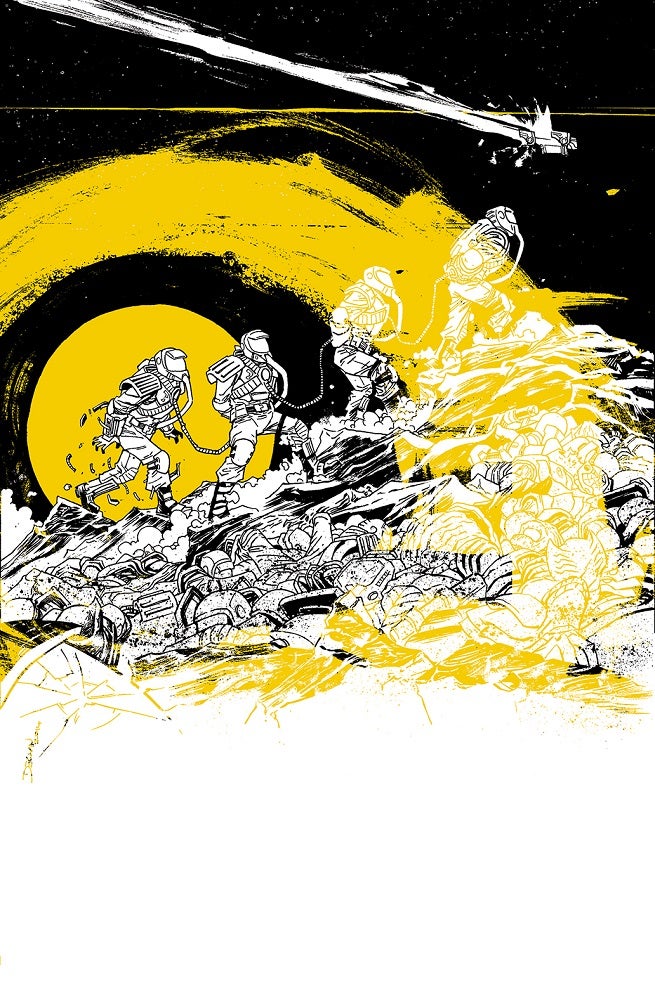 The system in this book is pretty thoroughly screwed-up, but there are certainly some real-life parallels. Cops have been known to prioritize catching the suspect over saving the victim, for instance, and military service as an alternative to prison is a time-honored tradition. What do you think are the biggest differences between the real world and the world of Cluster?

One of the things that Cluster is meant to explore is the dangers of privatization. That's not always going to be front and center, but it's always going to be there in some form. In the world of Cluster, both the military and the prison systems are fully privatized. The judicial system has quotas to meet and there's pressure on them to keep in line with the privatized systems. Right now, here and now, we do have privatized prisons (not all, but many) and I feel that things are moving in the direction of increased privatization — and that's not a good thing. It's a really terrible and scary thing.

What do you think is the most fantastical element: the aliens, the terraforming or a rich kid getting 15 to life?

Ha! For me, I think it's the alien tech. The rich kid getting 15 to life, well that's something that's going to be explored as the series goes on. Just how that happened, because, yeah, that's not something that we see often in our modern world with kids getting off on charges with defenses of "affluenza." 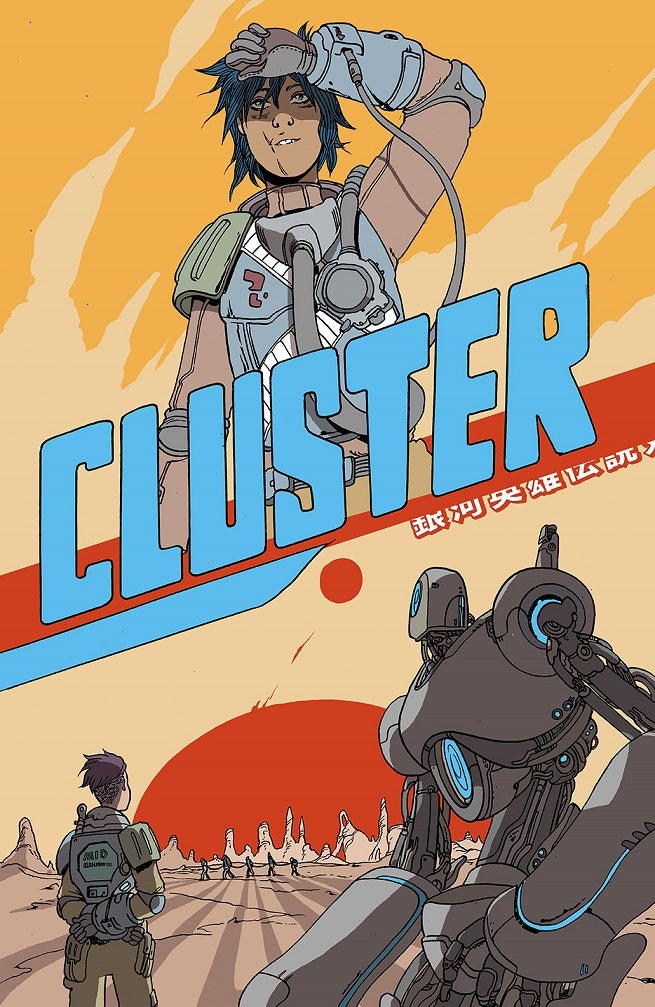 Are there Easter eggs buried for people who are paying attention? There's obviously a lot of room for it, with alien races, tattoos, prison numbers, etc.

Nothing yet, but I do tend to start throwing those things in from time to time, some connective tissue — however slight — between other comics I've written in the past. Readers of Sheltered (written by me, illustrated by Johnnie Christmas) may feel that Cluster sounds a little… familiar.

There seems to be a fairly overt critique of the prison-industrial system going on here. Was that something that you set out to do or did it just develop with the series?

It's something that's there for sure, as part of the back story. Part of that comes from… ok, I know someone, an acquaintance through a friend, who ended up in a US jail. I won't get into the why, but will say that he was there for some time and during that time, I would get these periodic updates on what jail was like in the US and it was something that was really shocking to me. I just… I guess I was just naïve at the time and didn't know. I didn't realize how privatized many prisons were and the various schemes that they'd utilize to raise extra money, often at the public's expense (but this is a whole long conversation that could take multiple interviews). The more I researched, the more horrified I became. I mean, some of the stuff that happens NOW feels like dystopian future already.

How much world-building did you do for this title? Do each of the alien races have their own kind of backstory?

I've done a fair amount, but have also left some of that to still be explored. I don't want to lock into anything fully or know all the answers, because that takes some of the fun out of it for me. The Pagurani, the main villain alien race in Cluster, for example, have changed considerably since they were first developed.

What would be your elevator pitch if you were selling a new reader on this book?

Buy it, or only one of us is getting off this elevator.