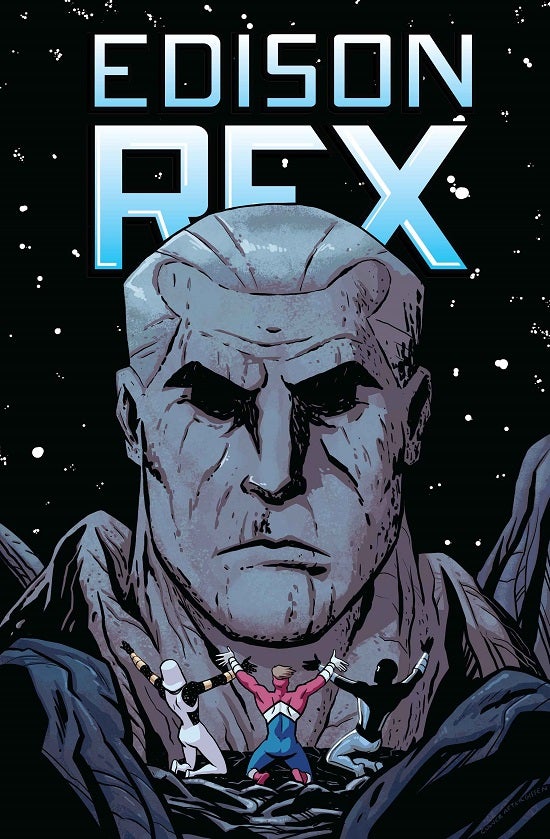 The most recent issue of Chris Roberson and Dennis Culver's fan-favorite Monkeybrain series Edison Rex is an unexpected twist on one of Silver- and Bronze-Age comics fans' most beloved conventions: the teen-aged super-team from the future, a la DC Comics's Legion of Super-Heroes stories. In the story, future versions of some of the world's greatest super-heroes (and Edison's old nemeses) show up out of the blue to tell Edison about his influence on their lives and work -- but as you'd expect, it isn't quite as tidy as all that. Is Edison Rex really considered the greatest role model of his generation, centuries into the future? The episode deals with the tricky and fluid nature of legacy in a world where time-travel exists. It's a bit of incorporating two things that Edison Rex has been doing of late -- theme or "tribute" issues that look at trends or creators that have influenced Roberson and Culver's storytelling, and world-building, creating a complex mythology behind Edison and setting up threats and threads for future storylines. At the same time, it tones down both a bit; this issue isn't as eccentric and seemingly self-contained as some of the recent theme issues, and while it was dealing with mythology, it steered away from the Eclipse family, who are currently investigating the death of Valiant. 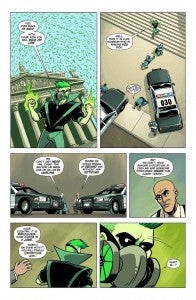 As ever, Roberson and Culver joined ComicBook.com to talk about this issue, and its place in the larger Edison Rex universe. Reminder: These conversations are very spoiler-intensive. If you haven't read Edison Rex #15 yet, go buy it at ComiXology, and then come back here to read along with us. ComicBook.com: First of all, I love Vlad Nauseum. There needs to be a one-shot. Chris Roberson: Trust me, we haven't seen the last of that bastard. Not by a long shot. Dennis Culver: Everything counts. ComicBook.com: Secondly, is the earplug thing meant to imply that Edison intended to put them in and ignore the case if he were selected for jury duty? Roberson: That is an excellent theory that fits the available facts. Culver: Waiting to be called for selection is pretty awful and Rex is always prepared. 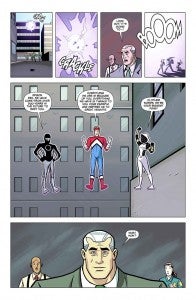 ComicBook.com: I guess it's that as a reader, we know things that Edison doesn't, but my first instinct was not to trust these guys dressed like his old enemies... Roberson: Noticed that, did you? ComicBook.com: ...that said, were the costume choices specifically designed to mislead the reader so that the reveal worked better? Roberson: Noticed that, as well. ComicBook.com: In that group shot of the CCA, how many of the futuristic heroes are new versus recognizable reworkings of existing Edison Rex characters? Roberson: I think only one of them has a name, and the rest were kind of generic super-types. Dennis, are there any more I'm missing other than that one you know I'm thinking about? Culver: Following what you noted above, a lot of them subtly and not so subtly riff on the members of the Peacemakers seen in #12's Rexfiles entry. Some of the others are riffing on other future teen-aged super people. ComicBook.com: Is it just me, or as a comic book reader does "The CCA" just SOUND evil even before they get started? Roberson: That IS a familiar set of letters in the history of American comic books, isn't it? Culver: You're on to all our tricks this issue... 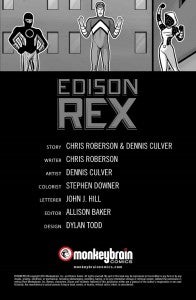 ComicBook.com: More than any other homage you've done, this one feels really specific to Edison (as opposed to Edison being a cool way to explore an idea) and like something where the idea came before the homage. Is that true? Roberson: I honestly can't remember how the idea came about. It may have been one of those that Dennis floated as a suggestion and that I immediately decided had to happen. Or vice versa. But either way, who doesn't love the idea of superpowered teenagers from the future?! Culver: I pitched this one originally to Chris as "Teenagers from the future show up inspired by Edison Rex. TWIST: They are supervillains." and we went to town from there. I think it became a much more meaningful story than either of us expected. It's one of my favorites! ComicBook.com: Did you have a particular part of Europe in mind when writing Vlad, or was it just kind of "Bond Villain"-style EURO bad guy? Roberson: He's very much a cartoon. If you dropped him in the middle of Epcot's World Showcase, he would have no idea which pavilion was home. Which is one of the reasons why he never says a word that isn't English. Just substitute whichever European accent makes the most sense in your head while reading his dialogue.