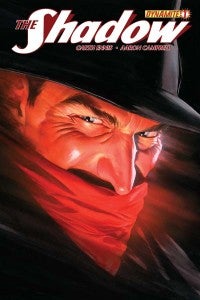 Like The Lone Ranger, whose 25-issue series was arguably the best that Dynamite has ever printed, Garth Ennis' The Shadow takes a classic pulp hero and injects him with live and excitement without lowering itself to the "easy out" of placing the stories in a more contemporary setting or altering the spirit to more easily fit with the author's style.

The Shadow's narratorial voice is pitch-perfect here, giving a real sense that Ennis has done his homework, and it gives the character a kind of crazed feel. He's one step beyond Batman, clearly not operating with a full deck, maybe even dangerous--and it makes the whole book feel a bit like anything can happen.

The dark, moody colors on the art give it the feel of a Vertigo book or an indie--something that a pulp fiction character certainly benefits from. You don't want to The Shadow to look like he was colored by people who spend all their time with superheroes. Everything is really perfect for the book; in addition to the colors, the lettering (particularly the logo type on the title page) evokes exactly what you want out of The Shadow. Hopefully, IDW's watching this title and taking notes for their forthcoming Rocketeer series.

That said, this is certainly a contemporary book with a pulp fiction feel. While classic Shadow stories may have involved this much wanton blood and death, it's unlikely that any mainstream comic published before Watchmen would have done so, and so when you see the hero killing four thugs in one panel, gallons of blood pouring out onto the page, you're very much struck by the dichotomy of a book that only moments ago felt like it may have been at home in the Silver Age. But it works well, and that transition isn't jarring or damaging to the narrative; it's just genuinely surprising, a feeling not enough books manage to capture when you turn the page. It's also likely a story that will read really well digitally for that reason; ComiXology's guided view will be well-served by that first truly shocking panel.

The supernatural elements of The Shadow are well-served in this story, and guide the plot ably as well as providing some nice comic relief in the quieter moments of the issue. After an action-packed opening sequence, it slows down a bit and gives us a real sense for who the players are and sets the stage for the rest of the first arc. the second half of the issue might have benefited from a bit more action, as the pacing seems very off with such a wild first half, but had it kept clicking along at that pace forever it would have felt like it ended so soon that it would be harder to justify the four bucks.

No trouble with that at all, as it is. This is a terrific read.

Ennis' The Shadow is a Pulpy Thrill Ride

WWE Fans Call For Bobby Lashley vs. Brock Lesnar at WWE SummerSlam After Hell in a Cell Victory

WWE Hell in a Cell: Bobby Lashley Escapes With WWE Championship Thanks to MVP