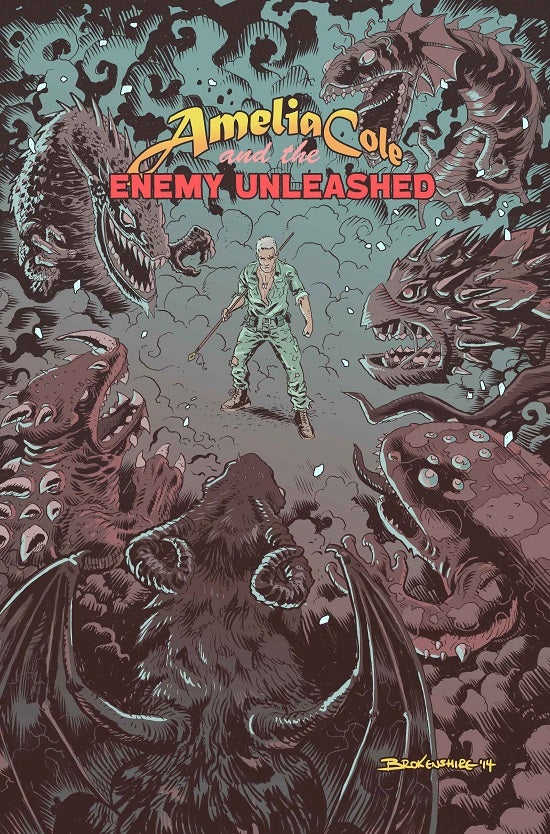 The latest issue of Amelia Cole is out, and it's glorious. Amelia heads back to her relatively spartan hideaway, while her entire supporting cast rots in jail and The Council looks for her to put the next stage of their plan into play. And, as ever, co-writers Adam P. Knave and D.J. Kirkbride have joined us to discuss the issue. Read on below. Warning: There are spoilers ahead. If you haven't yet read Amelia Cole #15, GO BUY ONE NOW and read along with us. 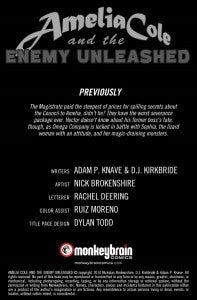 So first thing's first: How's it feel to be part of the Amazon family? APK: We get to fly the delivery drones! Woooo! No, nothing has changed for us. If anything does change it'll be way down the road. But for now - it is the same as it was a month ago, and the month before that, and so on. DJK: I keep hoping for a free Prime account, but nothing so far. ComicBook.com: I love the bouncing her teleportation-ball-thingy off the forehead of the ancient dark powers. It lent the scene a little levity, even though when people read this in trade it will be a very dark moment. Was that on purpose, or just kinda how you write naturally? DJK: We do like it when Amelia undercuts some of the drama at absurd moments with a little levity. It's not like the situation is a joke, far from it, but she goes with her gut, and her gut said to bounce that teleport ball off a Council-creep's head. She was aiming for his eye. APK: Amelia isn't a grim book, overall. So it's important to balance it out, even when the story takes a dark turn. ComicBook.com: We also get the (intentional?) parallel with Hector bouncing a rock off Sophia. Nicely played, whoever came up with that. DJK: That wasn't intentional on my part, but if neither Adam nor Nick claim it, then I will take the compliment. I have far less problem with that than I should have. My honesty's gotten me nowhere, guys. APK: I know it wasn't me. So D.J., you and Nick can fight it out, but yeah that was great. ComicBook.com: 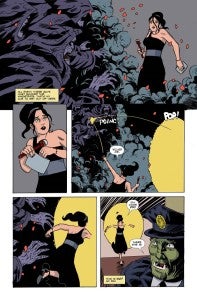 The weird science behind these monsters is interesting, in that it seems like our magic users have to actually be actively using magic to be leeched? You can't just have that energy within you or whatever? APK: Can you leech water from a faucet without turning the tap? Same theory, really. So far. This isn't the end game and that may be just THESE monsters. But yeah, we know the rules between all of us, and sometimes it really does just come down to plumbing. DJK: There is a "sense" when they are around. A kind of weaker feeling, but, yeah, it seems almost like the monsters are designed to engage magic folks, give them something to use their tasty, tasty magic energy on for some reason. ComicBook.com: Amelia's story here feels almost a little reboot-y. She's back to being on the run from the law, and has lost (at least for the moment) the supporting cast she's had in the form of the people living around her. DJK: We wanted to call back to the start of things, right down to her classic issue 1 outfit that still seems to be most identified with her. I see folks cosplaying it at cons all the time. So many fans in jeans and Chucks and flannel, and I'm all, "Wow, we have SO many Amelia fans!" It's not even at cons, actually. I see it on the streets. It's really amazing. APK: I know, right? All those cosplayers who don't even seem to know her name! But yeah, this is Amelia under pressure, this is her being rocked back to the start in some ways - but note how she's changed. This set-up lets us highlight that. The old Amelia wouldn't have stopped to go study. She's learning, and growing. 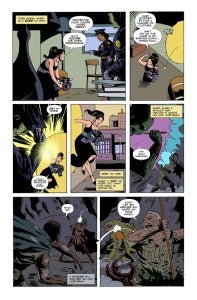 Is the runic lettering effect around some of Amelia's magic new, or am I really just not very observant at all? APK: Amelia is learning. She's becoming stronger and more confident, and we're showing that in a visual way that Nick came up with. We think it's really pretty. DJK: Yeah, part of it, in a "how the sausage is made" way is that Nick was getting bored of drawing the general magic energy glowings and whatnot -- BUT this also seemed to be a great way to show that Amelia isn't content on being powerful simply because she is too pigheaded to give up, because she goes with her gut and hopes for the best. That has been great and fun to write, but she is realizing it's not really going to cut it with how crazy things are getting, how powerful the bad guys are. We are showing Amelia trying to be a better mage through good old fashion study, and this new look for her magic that is creeping in is a fun way to visualize that evolution. ComicBook.com: I love the location here, her magic cave or whatever. Is this where we'll be operating out of for a while? DJK: It's her hideout for now, but Amelia does seem to be a bit of a vagabond, either due to circumstance or the fact that she gets antsy, or that jerks are always crashing her living spaces -- literally. APK: Really, she can't seem to keep a living situation in one piece for long, can she? 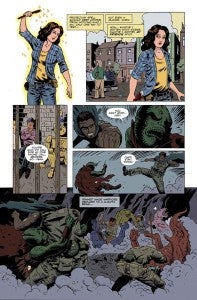 I also love the little scale model of the town she creates. Very...Beetlejuice. DJK: It was a cool way to show the layout of the city and give it some scope. Nick really nailed that visual. And now I want to watch Beetlejuice again. It's been years. Years! APK: I just watched it a few weeks ago. Except due to my love of 30 Rock I felt compelled to explain how eventually Adam Maitland gains a new body but loses his memory and becomes Jack Donaghy. ComicBook.com: I love the layout on the page with Kubert and the Sophia. It was a creative way of getting around a "talking heads' page. Was that scripted or was it Nick? APK: That was all Nick, right D.J.? The 2-up face grid. Yeah that was Nick and it worked out really well. It's what you hope for, really. We script stuff with layouts but Nick knows better because it's his job to, and so he changes things in exciting ways. DJK: Yeah, we had a more standard, kind of parallel action layout with Kubert and Sophia in the script, but Nick wanted to give it a bit more pizzaz. It looked great, so we adjusted the scripting accordingly. I like Nick a lot. He's talented AND gifted. ComicBook.com: So...assuming that fight scene ends the way we think it did...what happens to that spear? DJK: That is a great question. I mean, in this comic, wands (be they sticks or spears or wrenches) or only really powerful in their owners hands, so maybe nothing...but maybe...something...? Adam, should we make a note here? APK: There already is a note. But it's… well, we can't talk about that yet at all. Not at all. Then again we may never get back there - in the comics.