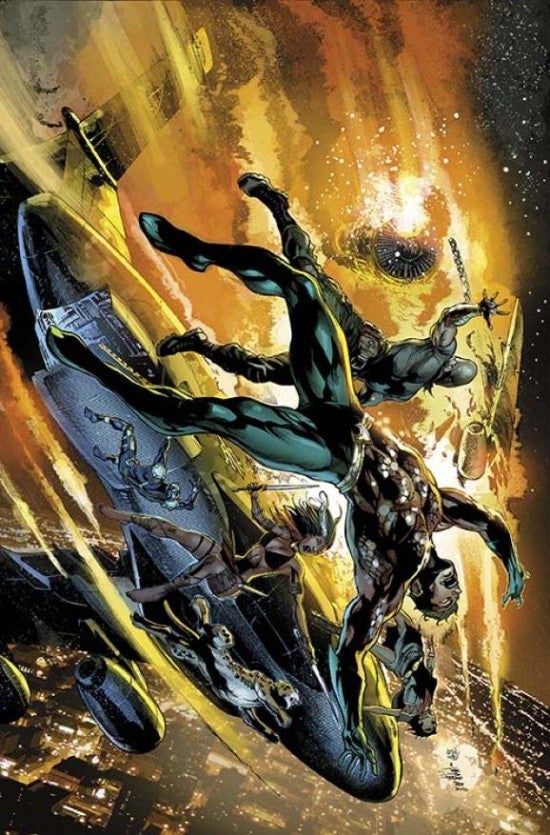 Last week's issue of Aquaman and The Others saw our title heroes trash a plane, a submarine and a bunch of rock monsters along the path to a seemingly-hopeless showdown with a powerful and devious but thus-far mysterious pair of methuman siblings whose endgame seems to be to recover the artifacts that give the team power. Series writer Dan Jurgens joined us to talk about the packed second episode, some of the things he feels writers must watch out for and, of course, the early critical and fan response to DC's The New 52: Futures End, on which he's a co-writer. Reminder: These commentary track-style interviews are spoiler-heavy. If you haven't read it yet, go buy Aquaman & the Others and come back to read along with us.

Is it safe to assume that Anton & Darya are new characters? The folks on the Fire & Water podcast were speculating that Anton could be Arcane, but it doesn't really fit to me. Dan Jurgens: They're new characters. I really believe it's important that we try our best to introduce new characters when possible. We carry the "New 52" tag, after all. ComicBook.com: Do you think it's risky creating new villains for new heroes in this marketplace? Everything is so centered on established IP that it almost feels like new concepts can feel like a Brand X. Jurgens: I understand what you're saying and will concede that it's a risk. But if I were to peg the biggest problems with comics today, one of those would have to be the lack of new characters at Marvel and DC. I know a number of writers who say they're holding back and saving characters for their creator-owned stuff, but that approach short changes the readers. We can't keep recycling the same characters and concepts over and over again. ComicBook.com: So is it safe to assume that Anton & Darya's...uh...intercom is related to Atlan? Jurgens: You could start to make that assumption, I suppose. 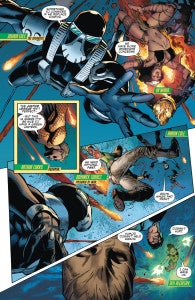 I'm intrigued by the fact that Anton refers to Kahina as "the Seer" but then assumes off the bat that Sayeh really is cuckoo for Cocoa Puffs and keeps referring to her visions as "hallucinations." Is there a reason behind that? Jurgens: Probably because Sayeh seems to lack coherence in her explanation and description of what she's seeing. This is all new to her. She hasn't had a chance to experience any of this before. And, don't forget, that Anton's crew took her out of an asylum. ComicBook.com: Obviously, she's still referring to her Futures End hallucinations. It's kind of nice that so far Aquaman & the Others isn't being bogged down by too much DCU interconnectivity. Will it be neck-deep Futures End eventually or will the connections be more understated? Jurgens: You'll have to stay tuned! ComicBook.com: All that asked, I'm not sure whether you've been following fan response, but the latest round of solicitations really seemed to generate a ton of interest and enthusiasm for Futures End. Is it gratifying, given that after the FCBD issue you had so many people concerned about the violence and the direction? Jurgens: Every writer wants fans to embrace their stuff. That's just the way it is. When it comes to Futures End, I really do feel that we have a powerful story to tell. It's a privilege to work with writers like Keith Giffen, Jeff Lemire and Brian Azzarello. We all come from different places as creators, but have built a story that moves in unison to a strong conclusion. ComicBook.com: Is there a possibility that the necklace worn by Goran in the flashback is one of the "missing" relics you've alluded to in previous interviews? Jurgens: Stay tuned!

Prisoner of War feels a bit like Ragman here, which is a connection I didn't make before. Could we eventually see ghosts come and go from his side? Jurgens: He isn't Ragman and I do have to be careful not to push him too far in that direction. I find him to be tremendously intriguing, due to the fact that, in many ways, he really is 10-15 characters all rolled into one. That offers tremendous opportunity. ComicBook.com: On the podcast I mentioned earlier, you said that you planned to seed some recurring names so that his Company more or less became supporting characters, or voices in his head. Does that come hand in hand with creating "stakes" for them, so they can be hurt or rewarded for their actions? Jurgens: Very much so, yes. There's an opportunity to be consistent there and we have to take advantage of that. A couple of those characters have to become almost as real as Torrez himself. ComicBook.com: On that note, there seems to be an intimation here that Sky understands his powers better than he does, and that he's perhaps more able to let his Company go than previously understood. Is that a fair reading? Jurgens: That's a very fair reading. She's certainly more comfortable with the concept of hanging out with ghosts and dealing with the spirit realm. ComicBook.com: I like the device that Sky's powers don't let her just wormhole from place to place, which is how I feel things like this often end up being used in superhero comics. They could end up trapped in there for just as long trying to walk to their destination as they could in the real world (or at least close to it), becuase there are only specific outlets, am I reading that correctly?

More or less, yes. It is not the ultimate shortcut between two places. There has to be a clear distinction between Ya'Wara's teleportation power and Sky's Ghostlands. ComicBook.com: What are the chances that Vostok and Kahina will continue to play a role, since we have Sky able to communicate with them? Jurgens: Again, stay tuned. But dead is dead, is it not? ComicBook.com: Even if they did surrender, Vostok still has his helmet...and other pieces are out there. So, without giving away what will actually happen, could that be a legitimate play by our heroes? Jurgens: The helmet will obviously have a role to play going forward. ComicBook.com: You know, you're pretty hard on their transportation. You've hinted that The Operative has other bases of operation, but does he have another plane up his sleeve? Jurgens: I think it's fair to say that the Operative could well be the second most resourceful character in the DCU. (Who's first? Aw, c'mon!) With that in mind, it's fair to say that he has any number of things up his sleeve. ComicBook.com: And the staffing joke aside, it's interesting that you've got a superhero team with no fliers. That's pretty rare. When you decided to take out the plane was creating that drama inherent to it or was it after you decided to kill the plane that you realized you could have some fun there? Jurgens: It was one of the very first things I realized when I looked at the group. A writer must ask, "What can this team do? What can it not do?" The lack of a flying character was very obvious.

Bringing in Aaron for comic relief really helps, I think, in a team that's full of these characters wielding ancient and formidable weapons and taking everything fairly seriously. Was it nice, though, to have a character like that who is NOT one of the title heroes, so you don't have to run the risk of turning anyone into a caricature like what happened to Beetle and Booster for a while? Jurgens: Yes, not so much for comedy relief as the fact that he's informal. The Others tend to be a more formal bunch so Aaron adds that casual nature that helps to break things up a bit. ComicBook.com: Did you realize at the time you were writing it that the visual of Tomo scrambling int he air would provide a little chuckle as well? Medina does a good job of not playing it for laughs, but the image of a cat in free-fall is just kind of inherently amusing because you can picture what it's doing that whole time. Jurgens: Yes, as I always think about stuff like that as well. Whenever you have a character that has a pet at their side, you have wonder how to handle it. I mean, a jungle cat on a plane? Where's the litter box? ComicBook.com: All that said, even if The Operative didn't have anyplace to go, presumably the team could just stick it out in the Ghost Lands, much to Ya'Wara's dismay, right...? Jurgens: My guess would be that long term exposure to the Ghost Lands would be a huge problem. It'd be very disorienting.