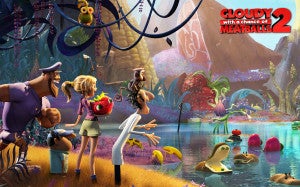 Yesterday, Cloudy With a Chance of Meatballs 2 opened in U.S. theaters and it's already aimed squarely at one of the biggest opening weekends of any animated film this year.

Earlier in the month, however, directors Cody Cameron and Kris Pearn joined ComicBook.com for a conversation about the film--and about the series of books on which it's very loosely based. The first part of our conversation, which discussed getting the movie made and how the studio supported it more than the first installment, can be found here.

ComicBook.com: I remember when the first one came out, I was dating the person who is now my wife. She was manages a Barnes & Noble and so while we were not at all part of the target demographic, she was at the same time very, very enthusiastic about the picture because she knew the books. Is it a different sort of pressure you think doing a story that you have to break - doing a kind of story that is an established property - can that sequel be kind of something that you guys came up with and not an adaption of the books?

Kris Pearn: I think as far as the adapting of the books you know the first movie we had to kind of invent the world - because what the book provided was a situation but not really the characters .

Cody Cameron: There were the food events but no Flint Lockwood, no machines.

Pearn: That was definitely something that we struggled with the four and a half years that i was on the project. Cody, I think you were there for two and a half years? When we came into this one, it was certainly of intimidating, the idea of stepping back into this franchise because you know it's become a very beloved property but I think for me, we got back in the room and it was Chris Miller, Phil Lord and Cody myself and our writer Eric Rivinoja and it was just like old times - kind of throwing spaghetti on the wall for the lack of a better pun and you kind of go through the process of how you make these things and you just kind of get into the job, you know what I mean?

Cameron: And also what do we want to see?

Pearn: We also benefitted from the returning of a lot of our team so our brain trust, for lack of a better word was really kind of coming back from the first film - so our production designer--

Cameron:  --Some of our lead animators--

Pearn: --A lot of our painters, story artists...

So we had a good group of people that were really invested in the franchise, invested in the characters and they wanted to get in another movie - so it got fun, rather than scary rather quick.

To some extent ignorance is bliss when you're telling jokes we kind of just have to be open to being dumb and silly and not over-question what we're doing and just let it feel natural.

We try to get everybody else on our team to feel that way too, the animators and the actors just to have that kind of ability to be on plot but loose enough that we're not letting ideas get past us. Where we're welcoming ideas and we're trying to make everyone feel as they're part of the process. And you kind of focus on that job as opposed to thinking about what's going to happen when that thing comes out to the theaters. 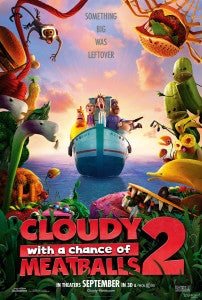 ComicBook.com: That said, is there a different approach when you're doing a second picture on something like this and suddenly, I mean I would assume that the first movie your entire goal is get it done, do a good job, don't worry about what's next - because you never know what's next. But when you're number two the nature of the business right now is that follows that there will be a number three. Unless…

Cameron: I don't know that will happen, we're going to have to see what it does on September 27th… I definitely think we've set up enough character, basically enough stuff in the second film that we can branch off and do multiple stories for a third film - but you know it's kind of hard to think about that right now.

Pearn: To be honest with you I think we kind of went at it the same way we did the first one where you kind of tell that story and get it to the end and heh, now we get to sleep. [laughter, clapping]

Pearn: Nothing bad will ever happen ever again!

ComicBook.com: I would think that doing a family film it's a little bit different animal that a lot of these other big franchises because like I said I talked to the Captain America and the Superman people and they're very, very guarded because everyone who talks to them is trying to get like, plot out of them, where as when I talk to somebody like you folks or when I talk to somebody like Raja about The Smurfs It's mostly like about - What I find most interesting is… the art and the process and and about the funny anecdotes that inevitably come up when you're talking to comedy people.  Is it nice to have the support of the studio because you're a franchise but at the same time, not have like d-bag reporters trying to ruin your ending?

Pearn: Yeah I think the people hunting for the big reveals of the film are probably a little more intense when it comes to the superhero thing because of the nature of the what comics are and how people get really obsessed with it. I feel like the conversations we had on the whole Cloudy front are mostly about how do you take these characters and move them into the next world and you know sort of what's the hook with the food, how do you get that back in the film?

A lot of the questions about the plot stuff that we're allowed to talk about because there's not a whole bunch of history with the Cloudy world, like there's one kids book or a couple kids books by Ron and Judy and the first movie, so it's not like there's a whole bible about Flint Lockwood history where people are asking how much do you know, how much are you faithful - sort of what are you doing to our childhood? You can fast forward 20 years from now, if they're doing Cloudy 18 - those two guys are probably going to get a lot of heat about who's going to be Flint Lockwood this time.

ComicBook.com: It's interesting, I saw that there was a third book slated, yeah this is what I saw and my understanding based on reading the article that I read - the first book very generally tracks the movie but it's not substantial enough to--

Cameron: food falls from the sky. None of the characters that are in the film are in the book at all.

ComicBook.com: The second book was really really out there and didn't really seem to have anything to do with the A the characters from the first one… it was really a sequel in name only and apparently the third one is going to be a more direct - basically they'll be doing a book that's Cloudy 2 - but you guys beat them to that….

Pearn: I love the books - when I was a kid they were definitely around and looked at Pickles to Pittsburgh we wanted a scene where the Pickles ended up in Pittsburgh but…

Cameron: We do have pickles, the little pickle tribe that Flint hooks up with and so maybe in spirit we've got that and I think in Pickles to Pittsburg - there's two kids that do go back to the island covered in food but there story is really that they were collecting up the food and taking it to countries that didn't have food.

Pearn: And we didn't want to get into that whole thing. I mean, as much as it's a good thing and we're very supportive of all the food bank stuff that the studio's doing, we're trying to tell stories about Flint Lockwood now. He's sort of become the face.

Exclusive: Cloudy With a Chance of Meatballs 2 Directors on the Books, Creating the World