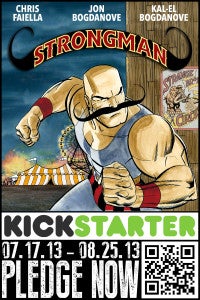 A generation of fans will remember Jon Bogdanove as the artist who launched Superman: The Man of Steel with Louise Simonson, and then stayed on the book for almost its entire run.

Since then, he hasn't had a mainstream comics gig with that kind of visibility, prompting some fans to react with surprise when he returned this week with a new Kickstarter project: Strongman, the tale of a 1920s circus strongman who assembles a group of sideshow performers into a kind of almost-superhero team.

Bogdanove hasn't been gone, though; he's mostly been doing art for DC Comics's licensed products, so it's just harder to spot. He joined ComicBook.com on the eve of San Diego Comic Con International to talk about his experiences at the Big Two and working on his own with his son to develop Strongman, a property originally conceived as a video game.

You can check out the trailer directly below, and the Kickstarter campaign here. Check back later in the weekend for more from Bogdanove about his time on the Superman titles. 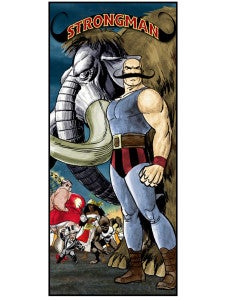 ComicBook.com: Obviously when you're talking comics, there's usually an element of the known. Where do we start here? What's the elevator pitch?

Jon Bogdanove: The elevator pitch is not something I've figured out or rehearsed yet [laughs]. But Strongman is the story of Bron Bellman--Bronislav Bellman--who's a mythical or a fictional 1920s circus strongman.

The story revolves around his adventures and the adventures of his fellow sideshow acts and freaks who form a sort of proto-superhero group in the age before superheroes.

ComicBook.com: And that's a new-ish concept, but it's one that's gained some ground since, say, League of Extraordinary Gentlemen.

Bogdanove: It's a new idea but it's intrinsic in the genre to begin with. If you think about it, Joe Shuster based Superman's concepts on circus outfits. The tights and the pants on the outside and his originally laced-up boots and even the cape are things that aerialists and strongmen would appear on stage with. Classically the man on the flying trapeze would stand up above the crowd and then whip his cape off before he went out on the wire.

So the tights and cape and boots that really form the basis of all superhero costumes and certainly the essential tropes stems from the circus. There's an early, preliminary drawing of Superman where he's wearing a sort of tank top or leotard top like circus performers do and it's really easy when you start thinking about the roots of these characters to find the circus connection in there.

I'm very fond of the first generation of comic book creators and the histories of these characters and I've done quite a bit of work--a lot of people know the story that I drew in Man of Steel where I drew like Joe Shuster and there are similar instances where I've drawn in an old-fashioned style. Or, I've worked with DC licensing imitating the styles of dead artists whenever they needed a Golden or Silver Age reproduction. I take that sense of stewardship very seriously, so the contributions and creations and inventions of that first generation of comics artists and writers is so rich and I think it is possible that there's some baby being thrown out with the bathwater when the companies rush to diminish and ignore and overwrite all of that history.

I started out doing their period work. I think I started with them becuase they saw the Hero Illustrated poster insert I did for Zero Hour and so I started getting work--some very strange jobs but a lot of Golden and Silver Age reproductions. And it sort of graduated from that into doing the contemporary stuff where I started to imitate Jose Luis Garcia-Lopez. He's actually harder to imitate than Joe SHuster, becuase he draws so damn well, and that gradually changed as things changed at DC licensing to be less an imitation of Garcia Lopez and more just sort of a DC house style.

My DC house style stuff, I did a lot of Batman style guides in the mid-aughts and some Green Lantern stuff around the time of the movie and some Justice League stuff that shows up on toys at Target all the time. I did a lot of that stuff and as it went on, I think probably more of my tells started to show through but even so I found it interesting, challenging and educational to suppress my Bog-ness for a while and to try and concentrate on sort of a universal brand style. It's oddly like doing portraits except instead of drawing a face of a person sitting in front of you, you're trying to internalize the thought processes of other artists and that was for me I think a very useful exercise. 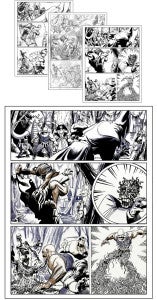 ComicBook.com: With Strongman, it began as a video game. It's interesting to me because I am an old person when it comes to video games and I haven't ever played a game with a particularly sophisticated story. So I'm always struck whenever I see these new games that essentially have four-hour movies built into them I'm a bit taken aback.

Bogdanove: I think story content in video games has been the biggest advancement in game design in the last ten years. Kal-El [Bogdanove, Jon's son and one of the book's writers] has for the last five years at least made his living primarily as a writer, designer and voice director of video games. For him, it's an outgrowth of his other writing--he's a screenwriter and works in all fields--but his narrative expression has found kind of a home in video games for whom story is increasingly important--certainly for Western audiences.

ComicBook.com: What is the process of adapting from a format where the meat of your story is made up by gameplay?

Bogdanove: Yes, and had Strongman actually become a game it would have gone in a different direction in terms of development. When they went with something else instead, nobody had any claim on Strongman but us and that was our favorite.

We just continued the process that started with the original game pitch and that's the same whether you're writing for a game or for a comic book or for a novel or for movies and television; it's character-based and character-driven which sounds odd if you're thinking about a game but increasingly it's the narrative content that makes the difference between games that play similarly. There's brawlers and first person shooters and quest games and they all have very similar game experiences. What really distinguishes them from one another are the designs of the characters and the world, and the story. Whatever is there to fuel the imagination of the player, and story is a big part of that. So it's very similar to writing anything else. We took these characters that were just meant to be hand-animated, side-scrolling brawlers, like castle-crashers, and we fleshed them out.

When you start drawing a character you can't help but start thinking about what that character's story is and writing or thinking about writing the character. I find that they very quickly become real and take on a life of their own. It's like finding a thread and just sort of pulling it until you come to the end. So you start dealing with fully-fledged real characters, who are so much fun you just want to spend time with them. And for me, that means hang out and draw them and write them. Hopefully for readers that means they just want to pick up the next adventure all the time and read it.

It's character-building, no matter what field I think you're working in. At least I work with character building.

ComicBook.com: Will there be more if this is a success?

Bogdanove: Well, what we're trying to do is to release--you know how Netflix has started releasing original content and doing it all at once? That's sort of the new paradigm for television watching because Netflix was smart enough to look at the field and go, "Well, how do people watch TV now?" They don't sit through ads; they wait until the season is done and then they binge-watch it. That's certainly what I do. I think comics have largely become the same thing. I think that it can be difficult especially for a casual reader to jump on int eh middle of an arc and have any idea what's going on and any sense of resolution or completion from a single issue. So many people, even established fans, will just wait until the trade comes out and will read that. I think that's a more satisfying way to read comics and that's the way people read comics now.

Kickstarter is perfect for that. You can take a year's worth of stories, assemble it into a single anthology and then release it at once. I don't know if there will be a second one--if there's sufficient demand I'd like there to be a second one; I can see myself working with these characters for a long time.

Individually the stories in the collection can be taken in any order. The idea here is to write and draw comci books that can be appreciated by a casual reader where you're not forced to penetrate an intricate web of pre-established continuity and you're not on the hook to unravel a huge, overarching arc. Basically we're writing episodes from various places in Strongman's life. We may set one story back at the turn of the last century, another story in the mid-20s where a lot of our action happens, we might set something in the thirties. We have in our head as creators a really solid understanding of Bron's life--from the 1880s in the forests of Russia through the 1960s and '70s. We feel really comfortable just jumping in anywhere when we see a story that needs to be told. But we're not dragging people thorugh a big, overarching Lost mystery where we're promising some big thing at the end--it's not like that. You can come in at any point, read any one of them, you can go back and read them in any order, that doesn't matter, the toys go back on the shelf at the end. Every single 25-page installment is a satisfying meal with fun and action and adventure and a satisfying conclusion.