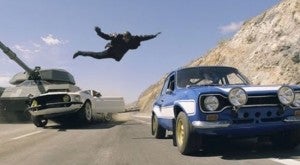 The news just keeps getting better for Fast & Furious 6. Early estimates had the film heading toward an amazing $100 million opening weekend over the four days counted toward the Memorial Day weekend. Now, those numbers are starting to get revised upwards.

Fast & Furious 6 is receiving very strong buzz from fans, and many followers of the franchise are declaring it the best Fast & Furious so far. Fast & Furious 6 delivers exactly what fans of the series wanted to see: faster cars, more amazing stunts, and plenty of Vin Diesel.

According to Deadline, Fast & Furious 6 took in $39 million on Friday (and Thursday late shows). The film is now projected to do $119.3 million over the holiday weekend (including Monday). Given the strong word of mouth for the film, we actually wouldn't be surprised if Fast & Furious speeds across the $120 million mark over the four days.