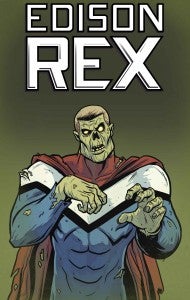 In an action-packed issue, there's often a bit less to scrutinize at the end of the month. Edison Rex #4 is no different, as the fight sequence between Edison Rex and Defiant (basically a Bizarro version of Valiant) dominated most of the book, leaving wreckage and the need for a new beginning in its wake. Writer and Monkeybrain Comics co-publisher Chris Roberson, as ever, joined us to discuss this month's issue. This is a SPOILER-FILLED interview, so buy this comic and read along with us. So--this issue is a lot less talky than the first few. Not that those felt slow, but this one just breezes by. Was that a question of just needing to establish Edison's world before you could careen headlong into action? It's more a matter of shifting gears occasionally. We've tended to alternate action-heavy stories (like issues #2 and #4) with more dialogue-focused stories (like issues #1 and #3). You've got to keep a varied diet, you know! I like pizza, but wouldn't want to have it at every meal. With his base trashed and a way into Valiant's place, will Edison be changing scenery? There are hints in the text pieces in the back of issue #4 that Edison has already been thinking along those lines, and in issue #5 we'll see what he has in mind. 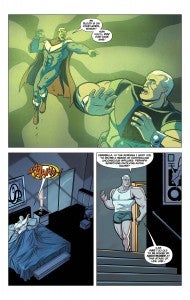 It would come with a whole new set of cool-looking background toys to break. It WOULD, wouldn't it? Last time around, I asked you about Defiant. What was the genesis of that character? Dennis stuck him in the background of issue #1, and when I asked who the character was he already had the character's name and backstory all worked out. I just took what Dennis had already set up and ran with it! Any good reason why he comes in with "kill Rex" right away? Because he's a mindless engine of destruction? Or maybe he just woke up grumpy? I like the rundown of the base post-destruction. That's a nice touch. Those handbook pages in the back of each issue have been an enormous amount of fun to do, but also an enormous amount of WORK. I probably spend as much time writing those couple of pages as I do on the rest of the script combined! 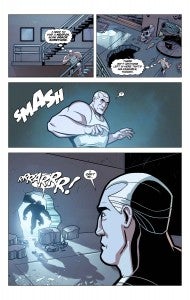 Does Defiant have any particular agenda in mind? I mean, he took off like a bat out of hell. He seemed pretty upset, didn't he? I guess we'll have to wait and see what he does next… I can't help it--no matter how many times i see the parody Hostess ads, I love them. Do you have a favorite--either a legitimate one or a parody? When I was first reading comics in the 70s, those sorts of ads were ubiquitous in superhero comics. And as a young reader, I just assumed that they were other little adventures that the characters had when they weren't busy in their own books. I liked the idea of doing that kind of one-page adventure, but doing it "in continuity," if you will. Putting Edison and company in a situation that can only be resolved by the liberal application of fruit pies. As for which are my favorites? Too many to list them all. But the one where Superman demonstrates the value of human civilization to an interstellar council by feeding them Hostess Cup Cakes is probably the one that sticks with me the most. You can read it here.  And I'll recommend Seanbaby's Hostess ad page in general. I lost a LOT of hours of productivity back when I still had a day job, reading through those pages.