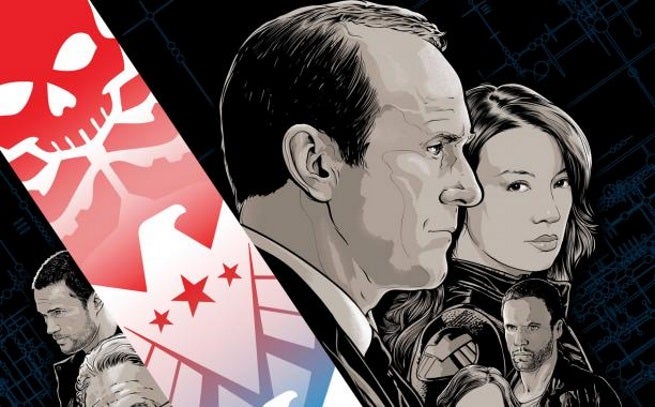 Marvel Studios has released the final teaser for the Agents of S.H.I.E.L.D. Art of Evolution series. The poster, by artists Joshua Budich, featuers all of the major characters from the show's second season, and highlights the narrative progression the series has undergone over these 22 episodes.

With Hydra suppressed and S.H.I.E.L.D. reunited, all things now point to Skye and the Inhumans.

"I would say that Skye's journey has been a big arc of this season," executive producer Jeff Bell tells EW, "and I think we're laying some sort of sense of resolution. If you're reading this season as a book, yes, there's going to be a sequel to this book. But there are certain aspects you'd want closed in this book. And I know if I were reading that book, that's one of the storylines I'd want to see closure on."

The art teases the two-hour season finale, "S.O.S.," which begins with S.H.I.E.L.D. and the Inhumans on the brink of war.

In "S.O.S." S.H.I.E.L.D. puts everything on the line to survive a war that blurs the line between friend and foe. Coulson and his team will be forced to make shocking sacrifices that will leave their relationships and their world changed forever.