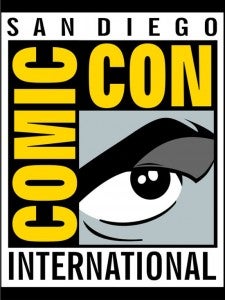 With monolithic TV and movie panels taking up much of the spotlight these days, you've got to be a Big Two publisher to even hope that someone will pay attention to your comic book...and that's ignoring the possibility that your TV or movie announcement will fall on deaf ears because it's announced on the same day as Batman vs. Superman or something.

What do we think got a raw deal this year? 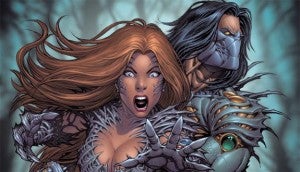 The Darkness Vs. Witchblade Movie

We already knew they were prepping a movie based on The Darkness, which makes sense; the comics are a staple at Top Cow, who have gotten aggressively into film recently...and there's a pair of best-selling video games that have brought the property the kind of mainstream awareness that few Image Comics--Top Cow or not--have been able to achieve.

This year, though, brought the news that with a script moving forward, one of the film's antagonists would in fact be Witchblade, who would be seeking out The Darkness, possibly because of their connection or possibly because in their secret identities she's a cop and he's in the mob.

Either way--could this super team-up beat Superman vs. Batman to the screen? 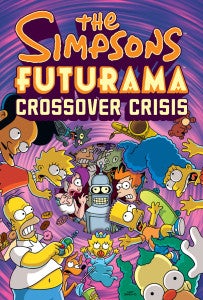 The Simpsons are crossing over with everybody

If this isn't a farewell tour, I don't know what is.

After a quarter century of avoiding long-form onscreen crossovers with Matt Groening's other series (Futurama) or their own heir to the Fox Animation throne (Family Guy), it came out at The Simpsons panel that the venerated TV comedy would be doing just that--both in the same season.

The Planet Express is coming to Springfield, with plans for the episode to air either as this season’s finale or next season’s premiere. The Family Guy crossover will reportedly taken place in the upcoming season.

With A-list writers announced for both Tomb Raider and Terminator--both properties which are being actively developed in other media and both properties which have huge potential to connect with non-traditional comics readers and expand Dark Horse's market--the publisher took a huge step forward in reasserting itself in a field (licensed comics) where they were once the dominant publisher in the industry but have in recent years lost some ground to people like IDW Publishing and BOOM! Studios.

Gail Simone on her own would be a huge "get" for Dark Horse, given that her exclusivity deal with DC recently ended and while she's been doing some licensed work for Dynamite, it hasn't been on the kind of project likely to capture the public's imagination. Tomb Raider is something else entirely, with a new game out and a new movie rumored. Pile Straczynski writing Terminator on top of that and you've got a very strong turnout for Dark Horse. 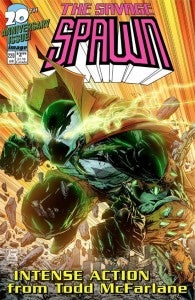 Alright, so this broke just after Comic Con, but it was tied into the whole Amazing Spider-Man 2 Comic Con media tour.

We'd already guessed this a long while back, but Jamie Foxx is the Oscar-winning actor who's been aggressively pursuing a Spawn reboot in which he would star. When Todd McFarlane, the character's creator, told fans that he not only was working on a new movie but that the actor planned to appear in the movie had already recorded 90 minutes of audio for a new animated series, we looked at the list of Oscar-winning actors who were, like Al Simmons, African-American. It's a pretty small list and many of them are too old for the role--or at least too busy to do it without anybody hearing about it. Ultimately out of the eight possible names, we boiled it down to Foxx and Cuba Gooding, Jr., but predicted that it would be Foxx.

The Big Two back down

Possibly the most interesting thing is that there was no Sandman announcement this year, figuratively speaking. There wasn't a comics announcement so big that it made the movie-and-TV audience at Comic Con stand up and take notice.

In fact--did either publisher announce any major new titles? There were a handful of creative changes announced but it seems like after a decade of fans complaining that "Comic Con isn't about comics anymore," one of the big pieces of news out of this panel is that the mainstream comics publishers seem to have stopped even trying.