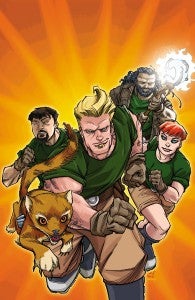 Alright, so this one's a drive-by, but we wanted to get a little information out there about December's issue of The Perhapanauts: Danger Down Under. Some further analysis of the issue will come attached to the commentary for #3, as the holidays and their attendant planning really screwed us all up. As ever, remember that these commentaries are spoiler-filled territory. Why not buy a copy of the book and read along with us? Did Big just not think about telling Molly or the rest of the group ahead of time about his...ahem...strategic move here at the beginning? With half the team missing, it seems like emotions would be running pretty high and you could probably expect that reaction, or something like it. As the gang had only recently arrived in Australia, I think Big was hoping that Choopie would be fully recovered and able to run as tracker. I honestly think bringing Sampaquita was a last minute, almost reluctant, thing... Is Sara Vera another character named after somebody? (Because I know a person named "Sarah Mara" and I thought only her parents were that mean.) Sara Vera is not named after anyone. I just liked the sound of her having these two first names that everyone refers to her by. 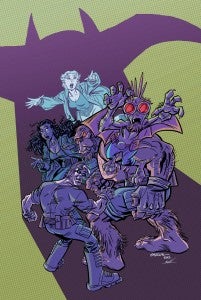 When you're trying to differentiate a Bunyip from a chupacabra or the Jersey Devil—I mean its modus operandi, before you see the critter on-panel—is that a challenge, writing-wise? I love the idea of (characters) being chased by enormous Monsters, so we decided to make the Bunyip BIG! I do need to start assigning more sentience and/or personality to the creatures that the Haps confront; the roaring, rampaging type are cool--and, hopefully, scary--but eventually people will start accusing me of just writing "RAAAAHRR!" all the time. Don't want that. Hey! Sara Vera gets to call him "Emo!" Is she special? Sara Vera respects Emo Woody Franson, but also knows there's not always time for that bulls--t. That mongoose is kind of a jerk. Will we get to find out more about Gef's history with Big? Yes, Gef is a jerk and, yes, I have a whole story mapped out about Gef's earlier encounter(s) with the American contingent. Whether we ever get to them or not remains to be seen.

Five Questions About The Perhapanauts: Danger Down Under #2