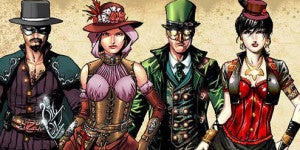 Bill Willingham, the creator of Fables for DC/Vertigo, will roll out Legenderry,  a seven-issue limited series, at Dynamite early next year that sees famed comics and film characters reinvented as a kind of steampunk superhero team. The Six Million Dollar Man, the Green Hornet and Kato, Zorro, Vampirella, Silver Star and Captain Victory, Flash Gordon and The Phantom, and Red Sonja are the heroes of the series, which will feature art by Sergio Fernandez Davila and covers by Joe Benitez. "This is a story where I get to have my cake and eat it too," said Bill Willingham. "I get to work with some of my favorite characters from comic books, prose, and film, but also get to create brand new versions of each one of them. That way, I don't have to make a single one of them fit in with all of the past continuity of those characters. I get the best of both situations. Plus, I built an entire new world in which to place those characters. World-building is one of the best parts of adventure storytelling. Legenderry is the name of the world, and it is in fact a world peopled with some of the greatest legends of adventure fiction. This is my first-ever foray into the Steampunk genre, so that's another new adventure I get to go on as a writer." What's the over/under on who quickly this whole group is being cosplayed? I'd give it... ...wait, how many days until New York Comic Con?

Flash Gordon, Vampirella and More Team Up in Steampunk Series From Fables Creator

My Hero Academia Levels Up an Unlikely League of Villains Lead