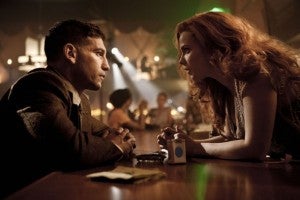 , the upcoming Frank Darabont-led television series based on the John Buntin book L.A. Noir: The Struggle For The Soul Of America’s Most Seductive City, will be renamed before the show ever airs.

The “company with the video game called L.A. Noire threatened to sue the sh-t out of me, TNT, every company that actually ever worked in Hollywood,” Darabont told io9 during an interview. "And they have the billions of dollars to back it up, apparently. So we're changing the title, and I do believe the title is going to be Lost Angels. This is being announced right here. It's a very, very cool show. It's [set in] 1947 LA and it stars my very dear friend Jon Bernthal, whom I worked with on The Walking Dead who is now free of that."

Rockstar's publisher, Take-Two, denied the allegations, acknowledging that they had made an unfriendly call to TNT but denying that any legal action had been openly threatened:

"It's unfortunate that Mr. Darabont finds it necessary to gain publicity by making inaccurate statements – Take-Two never contacted Mr. Darabont nor threatened to sue any party. The facts are that Take-Two reached out to Turner to express concern over confusion between the properties and they responded that they had decided to change the title of the show independent of Take-Two's concerns."

The series, as told by TNT’s head of programming Michael Wright, “a sweeping tale of the battle for the soul of the city that was waged between the forces of the LAPD and the West Coast mob.”

Frank Darabont's L.A. Noir to Be Renamed Before Airing