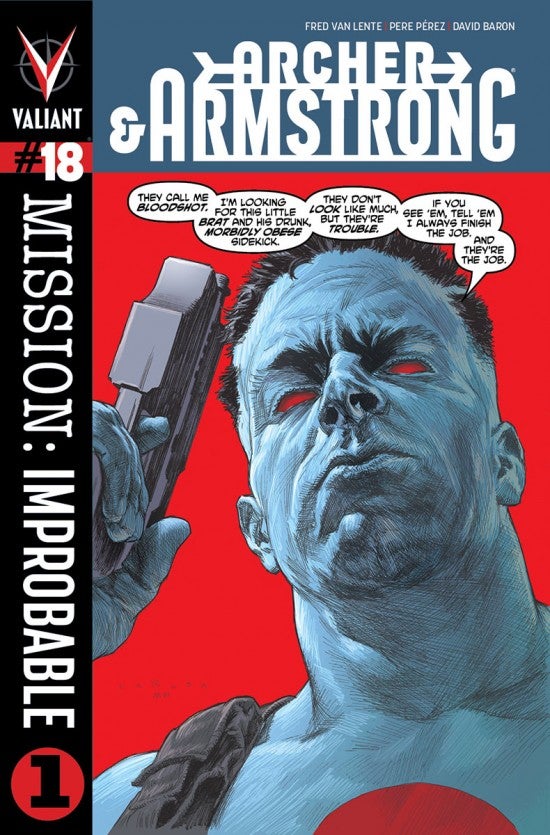 This month sees Archer & Armstrong and Bloodshot and H.A.R.D. Corps kick off a multi-part crossover story, written and drawn by the title's respective monthly teams.

It's a fairly new concept for the relaunched Valiant Entertainment--and for Archer & Armstrong writer Fred Van Lente, who joined us to talk about "Mission: Improbable," Archer & Armstrong #18 and the process of working with other writers on characters that have been largely his and his alone since the title launched two years ago.

Remember that these conversations are very spoiler-heavy. Archer & Armstrong #18 is available on ComiXology if you haven't read it yet and would like to read along. The second part of the story, Bloodshot and H.A.R.D. Corps #20, is new this week. 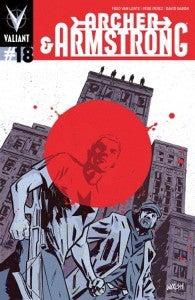 ComicBook.com: What impact will a weakened Sect have on the world at large? They were pulling so many strings behind the scenes it seems like destabilizing them the way Archer & Armstrong have could have far-reaching consequences.

Fred Van Lente: Certainly initially, but they've proven so inept at global domination in the past with Archer and Armstrong in charge they've got nowhere to go but up.

ComicBook.com: It's interesting to me that, because "Sect Civil War" was such a descriptive title but also not crazy over-the-top, you can use it in dialogue and it doesn't feel weird or forced in the way that something like "Blackest Night" might. I don't know that it's a question so much as an observation, but is it nice to have a big landmark-type story like that and be able to just reference it comfortably?

Van Lente: Yeah, I debated whether or not to do that but ultimately it's just easier and more succinct than a longer description: "Remember that time when all the factions in the Sect were trying to kill each other? Yeah, that sucks."

ComicBook.com: You know, I've never read Goofus and Gallant stories, but I am familiar with the reference due to a Kevin Smith movie. Do they actually have anything in common with Archer and Armstrong, in your view?

Van Lente: Nah, I just remember them from Highlights for Children in various doctor and dentist's offices when I was a kid. https://www.cracked.com/funny-5498-goofus-gallant/

ComicBook.com: The Levine poem (An Abandoned Factory, Detroit) is one of the most literal of your cultural references in the comic, isn't it? Or is there more between the lines than I'm giving it credit for? 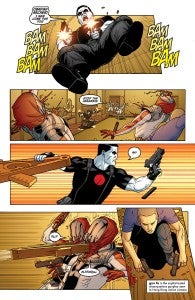 Van Lente: I did a search of Detroit poetry, and then, on one of my favorite shows, Moyers and Company, and source for a lot of the poetry references in this comic, a few days after I turned in the script, Philip Levine appeared on the show, and read that specific poem I chose! I thought that was so cool! So most literal, but also ended up being the most timely, in a weird coincidental way: https://billmoyers.com/segment/philip-levine-on-americas-workers/

ComicBook.com: Last I knew, Vagabond was supposed to be dead. Did I miss something in Bloodshot and H.A.R.D. Corps, or is this the first we're hearing he's not?

Van Lente: Beats me. No one ever told me he was supposed to be dead.

[Ed. note: that issue is briefly addressed in this interview.]

ComicBook.com: Obviously we saw here that the prophecy didn't work out just the way Archer expected. Can we expect to see more of that, in terms of twists on what the Seven Sages told him and the prophecies not being quite what he expects?

Van Lente: Right, though it was Ivar who told him that. I think originally Ivar's line was "defeated" instead of "destroyed," but when I wrote some of his prophecies I had a slightly different conception of how this confrontation with Bloodshot was going to play out.

ComicBook.com: Bloodshot is a really complex character; is the fact that he knows he's being used and goes ahead with it anyway tied up in that, or is it really as simple as being pissed that Archer took advantage of the opportunity to shoot him?

Van Lente: All I'll say is that Bloodshot has a specific motivation of his own that'll become clear in the second half of the story. 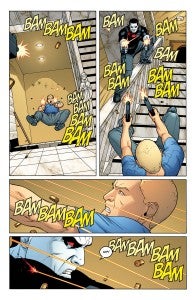 ComicBook.com: Obviously this week, we got part 2. What was the writing process like between you and the Bloodshot team?

Van Lente: It was fun! Christos Gage and I would kick around ideas on the phone, then we'd go into our prospective corners and write out scripts. I worked with Christos a lot at Marvel Games but it was the first time we did a comic together, it was super-fun.

ComicBook.com: Now, have you ever really done a story like this before? These inter-title (but not line-wide) crossovers feel like they aren't as common as they were the last time we had Valiant.

Van Lente: I haven't! This is what to me is a proper "crossover," with a single story being spread over multiple titles, at least that's how I thought they should be as a kid. It was really a lot of fun, and served the overall storylines of each book quite well, I thought.

ComicBook.com: Had Bloodshot not shown up, did the Builders have a plan for Archer? It seems like the fake Wheel might have kept him occupied for only a minute.

Van Lente: No, this was the plan -- induct him, then show off their Wheel, which they did not realize was a fake.

ComicBook.com: Was the "Made in China" INTENDED to suggest that they were either incapable or blatant, or was it just something to give the readers a hint as to what was going on? 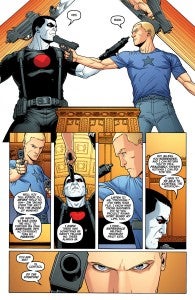 ComicBook.com: You've had more or less total control of Archer & Armstrong so far, but not only are you getting into this crossover, so the Bloodshot team gets to write the guys, but also you're working with Tom Fowler on the Q&W/A&A crossover. Is it a little odd to have to share these toys, or are you fairly used to that, working on other people's properties at Marvel and the like?

Van Lente: You mean James Asmus, right? I am working with Tom Fowler on HowToons over at Image, though -- pick it up for the kid in your life this summer! https://multiversitycomics.com/interviews/fred-van-lente-and-tom-fowler-reignite-the-world-of-howtoons-interview/

I've been doing A&A for two years, so I'm perfectly comfortable sharing with others at this point -- and the HARD Corps experience was pretty awesome, so I'm looking forward to the Quantum & Woody stuff quite a bit. James is old friends with my wife -- they're both playwrights -- and we got ourselves in quite a bit of a giggle fit coming up with The Delinquents plotline. If the readers have half as much reading the thing as we did coming up with it, we will have done our jobs.

Star Wars: The Acolyte Showrunner on Her Favorite Version of the Franchise

WWE Championship Match Confirmed for Money in the Bank 2021

Star Wars: The Acolyte Showrunner Points Out How Entire Franchise Is "Political"

One Piece Debuts Promo for Episode 980