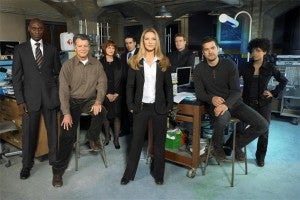 FOX's Fringe is heading into its final season with some big changes in store: a time-jump, a big return and a bit of a loss. Co-showrunner Jeff Pinkner is leaving the series, according to a report at Deadline, "to pursue other projects." Pinkner has run the series since the first season, being joined at season two by J.H. Wyman, who will take over the show in totality with Pinkner's departure. "For four years, J.H. Wyman and Jeff Pinkner have worked tirelessly as a team to keep all the worlds in order on Fringe," said series co-creator J.J. Abrams in a statement. "We're thankful for the invaluable contributions Jeff has made to the show and of course wish him well and look forward to working together in the future. J.H. Wyman's importance to Fringe cannot be overstated, however, and I'm thrilled that he will continue as showrunner for the concluding chapters of our story. We can't wait for our fans to see what we have in store for them in the wild conclusion of Fringe." TVLine, meanwhile, has it on good authority that Anna Torv's Olivia will return to the fan-favorite series for its final season in the fall, and that when she does, it'll be substantially later than it was when last we saw the cast. "As far as I know, we're just jumping ahead [to 2036]," Noble told the site on Monday, but "there will be references" to the lost time with "found footage" popping up to fill in viewers on the most significant moments of change. The actor also promised that he was as eager to see the loose ends and teasers wrapped up as the fans were, assuring TVLine that the final season would be satisfying in that regard.

Fringe Jumps Forward in Time, Without a Showrunner, For its Final Season