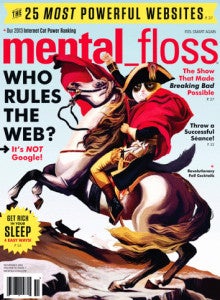 This month's issue of the offbeat pop culture magazine mental_floss features a cover story tackling what they consider some of the Most Powerful Websites of all time--including one familiar to many comic book fans near the top of the list.

Coming in at #3, here's what Mental Floss had to say about Women in Refrigerators:

In 1999, writer Gail Simone noticed an unsettling trend in comic books: a disproportionate number of female Superheroes were being killed, maimed or depowered, compared with their male counterparts. So she created Women in Refrigerators, a database of heroines who had met untimely demises. The name comes from Green Lantern's girlfriend, who was stuffed into a fridge after being murdered by one of his nemeses.

Simone did more than just chronicle these grisly ends. By giving writers the opportunity to respond ,she created an important forum for discussing sexism in the art form. The site opened the doors to dimilar critiques about the disproportionate attacks on gay and lesbian characters. Soon, the phrase "women in refrigerators" became shorthand for problematic depictions of women across pop culture. It also helped Simone become part of the solution. In 2007, she became the first female writer to helm DC's Wonder Woman in the title's 66-year history.

Simone's more than that, of course; she's become one of most respected writers in comics and a vocal advocate for a number of causes, both female-centric and not, in and outside of the industry. Currently, she's taking on Batgirl for DC, Red Sonja for Dynamite and Tomb Raider for Dark Horse Comics.

Everything Coming to Hulu in February 2021

Batman: The Animated Series Sequel Reportedly In The Works For HBO Max

Disney+: Every Movie and TV Show Arriving in February 2021