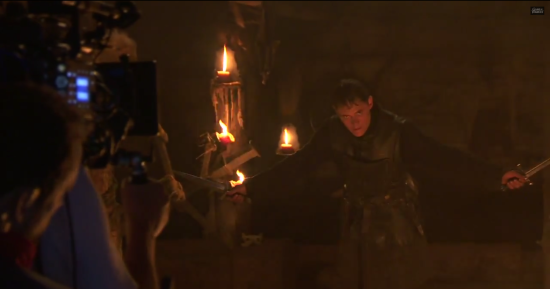 A new video released by HBO gives a behind-the-scenes look at the battle between the Night’s Watch and mutineers at Craster’s Keep in last night’s episode, “First of His Name.”

“The mutineers are ex-Night’s Watchmen,” says director Michelle MacLaren. “So, what we wanted to convey was that this was a fairly equal fight and that, in fact, Jon and his group are probably the underdogs because they are slightly outnumbered.”

One of the most challenging parts of filming the battle was the one-on-one combat between Jon Snow and Karl.

“The Karl-Jon fight was, by far and away, the most complicated, difficult fight that I’ve ever done in Game of Thrones and, in fact, ever in anything,” says Kit Harrington, who play Jon.

Game of Thrones: Behind-The-Scenes Of The Battle At Craster's Keep