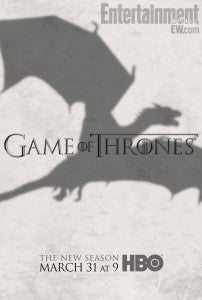 Fans of HBO's adaptation of Game of Thrones got their first look at the show's third season tonight as both a new poster for the show and an announcement trailer for the third season hit the Web.

The poster, seen at right, is every bit as much of a tease as those True Blood posters were last season, tantalizing fans with a major reveal without actually showing the dragon itself.

The announcement trailer was more of the same, offering only the briefest glimpses of footage and then a message that a full trailer would be revealed on Jimmy Kimmel Live.

It was, and we've got it below. "Death is coming for everyone and everything--a darkness that will swallow the dawn," warns the trailer, which gives us a bit more fulfilling looks at a number of sequences. Throughout the ad, fire is a recurring motif, both in the foreground and in the background, and this time fans do get a glimpse at a dragon, albeit brief and from behind.

Game of Thrones Season Three Gets a Poster and Two Trailers

Latest Reports on Where WWE Will Hold SummerSlam 2021