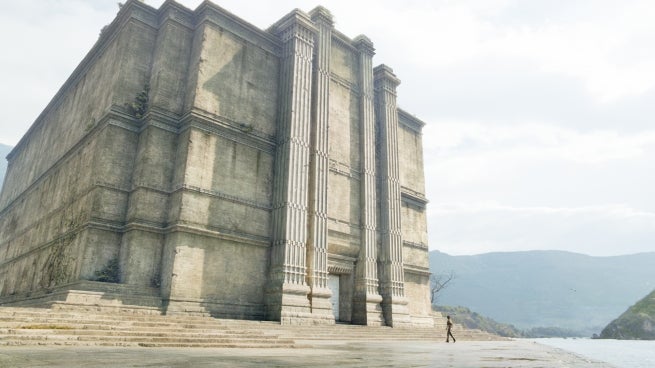 Tonight’s episode of Game of Thrones, “The House of Black and White,” brings us to Braavos, where Arya visits the mysterious, titular structure.

What exactly is the House of Black and White, and what does it mean for Arya? We can explain, but be warned that SPOILERS follow.

The House of Black and White resides in Braavos, and is the headquarters of the mysterious Faceless Men. Game of Thrones has introduced us to one of these Faceless men already, who was going by the name Jaqen H’Ghar when he met Arya in Westeros.

The Faceless Men are an order of religious assassins who serve what they refer to as the Many-Faced God. Their origins go all the way back to Valyria before the Doom, where the first Faceless Man started giving “the gift” of death to slaves who cried out to their gods, in order to put an end to their suffering.

The first Faceless Man, and those that would follow, believed that the slaves of various religions all prayed to the same god, Death, just in different form, such as The Stranger of the Faith of the Seven. Now set up in Braavos, some make the pilgrimage to the House of Black and White seeking death, and the faces of those who die in the House of Black and White are cured and used to create masks for the Faceless Men’s many disguises. The Faceless Men can be contracted to give “the gift” to anyone in the world...for a price, sometimes monetary, sometimes more personal. Either way, it is always high.

So what does this mean for Arya? It means she is about to begin training to become a Faceless Man herself. It’s a big development for the character, from first learning under the tutelage of Syrio Florel (“What do we say to death? Not today.”), to becoming part of an order that actually worships death.

Game of Thrones airs Sundays at 9 p.m. ET on ABC.

Game Of Thrones: What Is The House Of Black And White?