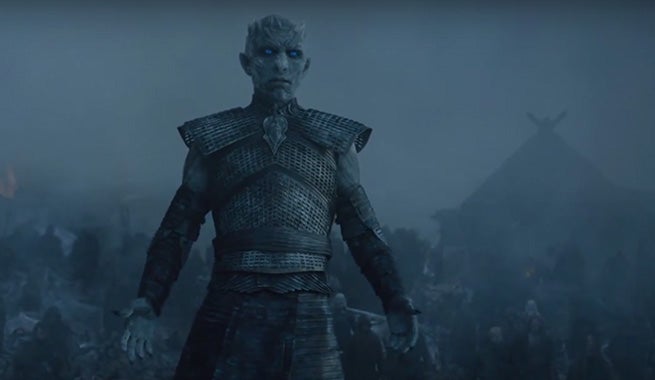 After this Sunday's "Hardhome," episode of Game of Thrones, everyone is buzzing about the appearance of a particular character. If you're not up to date on the novels you're probably feeling out of the loop on your Twitter feed wondering who that character is. Here's your warning - SPOILERS follow if you haven't watched the latest episode and for the Game of Thrones novels if you haven't yet read them.

As the tales go from the Game of Thrones novels, the Night’s King is said to have been an early Lord Commander of the Night's Watch who met a White Walker woman (something we have still never seen in book or show) and fallen in love with her. The tales recounted in the novels go in detail to claim that when the former Lord Commander gave his seed to the White Walker, he also gave his soul. He returned to the Wall with the woman and declared himself the Night’s King and the Walker his queen. They ruled their “kingdom” of Night’s Watch brothers from their seat at the Nightfort for thirteen years, performing human sacrifices all the while. Eventually, the King-Beyond-the-Wall and the King in the North rallied their forces and joined together to overthrow the Night’s King.

The tales told in the books say that the Night’s King was killed, but fans have speculated about his final fate and his possible involvement in the return of White Walkers to Westeros in the present day.

The Night's King has the ability to raise the dead into wights (basically: zombies) which serve the cause of his army as we saw at the end of "Hardhome." He also appears to have the ability to turn living humans into White Walkers as seen with Craster's last son. After Craster was murdered, the Night's King placed has hand on the baby and it's eyes began glowing blue.

At the end of A Dance With Dragons (warning again, we're getting into very spoilery territories here - you can't unread this!), Jon Snow is stabbed four times by men of the Night's Watch who form a mutiny against his leadership. It's been debated ever since the book's cliffhanger whether Jon Snow is dead or not and if he is in fact dead, will he be resurrected? There's a number of possibilities here but one is more prominent than others and after "Hardhome" seems to have gained more firm ground to stand on. With the Night's King having witnessed Jon Snow being the one to take down a White Walker (using Longclaw, a sword made of Valyrian steel), he'll likely keep his eye on the Lord Commander and possibly resurrect Snow as his successor should he be similar events take place on the television series and Snow actually die.

We only have two episodes left in season five to learn more about the White Walkers and The Night's King. Game of Thrones airs Sundays at 9 PM EDT on HBO.