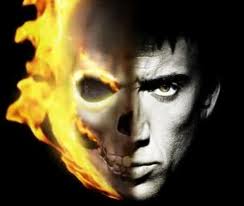 'Ghost Rider: Spirit of Vengeance' (aka 'Ghost Rider 2'), will have a more supernatural take to it than the original, according to Digital Spy. Says Cage:

It's not going to be like any other comic book movie you've seen...We keep stressing that Ghost Rider is the most supernatural superhero of all and that's going to really come out in this movie.

The supernatural element shouldn't come as a surprise. Cage has been THE driver on a sequel, and he had two objectives for this film: set it in Europe (check) and make it more supernatural (check).

So Cage has everything he wants to make this film a hit. Most of the comic book world couldn't bear the thought of another 'Ghost Rider' movie. Let's hope Cage knows what he's doing.

Because if he blows the sequel, that could be it for him and comic book movies.

'Ghost Rider 2' To Be More Supernatural Than Predecessor