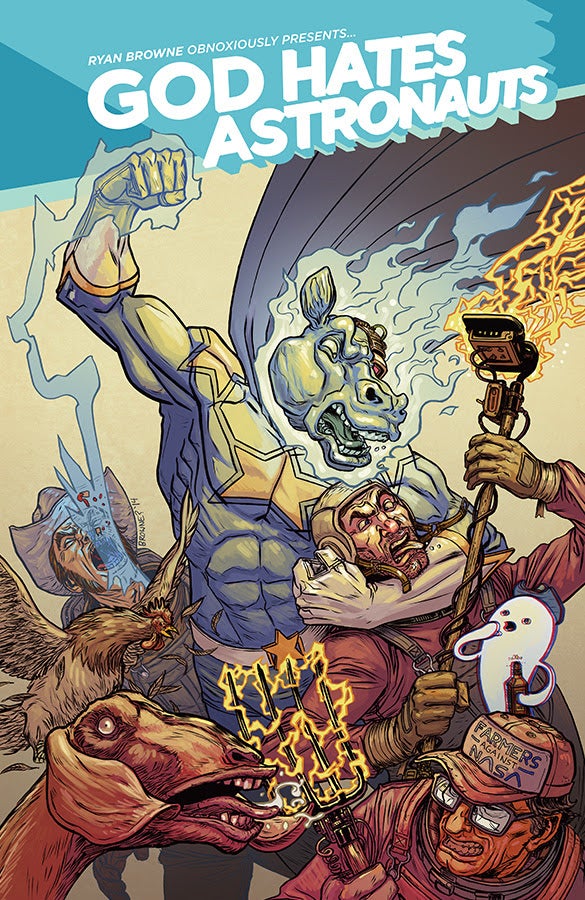 As originally announced at C2E2, Ryan Brone's cult-sensation webcomic God Hates Astronauts is returning to Image Comics with an all new story this September.

In God Hates Astronauts, a NASA-funded group of arrogant "super people" must stop a rash of farmers that have been using rocket-powered silos to launch themselves into outer space. As these Astro-Farmers fire themselves all over the galaxy, NASA must utilize their every resource (a guy with a ghost-cow head, a bunch of magic bears, and a Chicago cop with robot arms) to avoid an intergalactic incident.

"Jumping from weekly web-comic to large scale epic adventure has been extremely challenging and rewarding," said Browne of his transition from webcomic to Kickstarter project to an ongoing print series with Image Comics. "It was very important to make God Hates Astronauts #1 a perfect jumping on point for new readers, while having enough allusions and references to the old material for the series' die hard fans. I hope you guys like astronaut farmers with laser pitchforks, space crab armadas, and three-dimensional cowboy narrators! Rest assured, it will all make sense yet be as stupidly-ridiculous as the law will allow!"