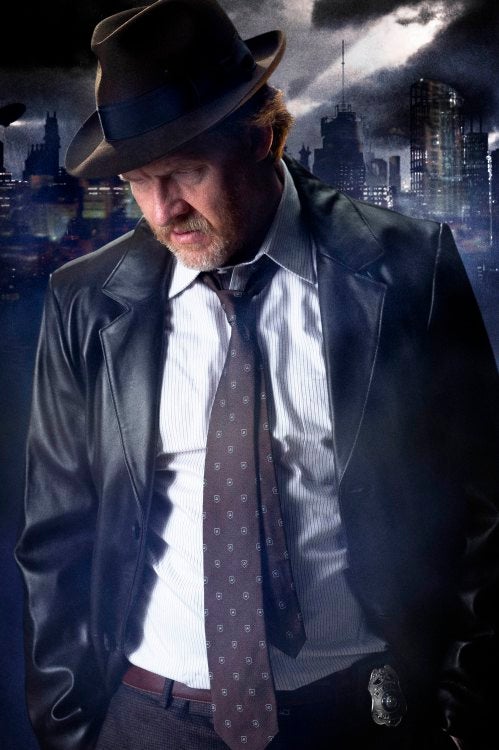 In a new interview, Gotham star Donal Logue -- who will play Jim Gordon's partner Harvey Bullock on the Batman prequel series for Fox and Warner Bros. Television -- tried to allay fan concerns that a series set in Gotham City simply isn't that interesting if the Dark Knight doesn't yet exist. Saying that the series is really more about a what could possibly happen to make a place so broken that it needs a Batman, Logue said that Gotham is inherently an interesting place. "It's interesting because people will say, 'What good is Gotham? A Gotham without Batman is stupid!,'" the actor told IGN. "What's fascinating about Gotham is like, what happened in the 20 years before Batman was so effed up that it needed a vigilante to come and save it -- and those moral decisions have repercussions. Like, Gordon does stuff that seems to come from a good place, but you can do something and -- this kind of goes back to the statecraft argument -- say, in Vikings time, if I want to kill my enemy, I have to kill his kids. If I don't kill sons, they're coming after me and mine for the rest of our lives. So you've got to pull the root out. That's something that Gordon struggles with, being that brutal. Then later, if some bad s--t goes down, you can say, 'Well, that was your bighearted moment.' It's kind of mock politics, so it'll be interesting to see. I'm super fascinated to see where a lot of these things go. The question is, how did we get there? How did we get to the point where we had to have a Batman?" His position, of course, isn't far off from filmmakers like Tim Burton and Christopher Nolan, who have treated Gotham City almost as its own character, particularly with Nolan's trilogy almost feeling like it was more about the city than Batman, given how comparably little he was active during the decade or so the movies took place. Gotham has completed filming on the pilot, and while there's no word yet whether it was officially picked up to series, it's widely expected to since Fox bought it as a series, with a steep penalty to pay if they don't produce and air 13 episodes. The series, set immediately after the murders of Bruce Wayne's parents, will follow members of the Gotham City Police Department during a time when traditional organized crime is falling apart, replaced by the kind of freaks who will eventually become Batman's rogues' gallery.

Gotham Star Donal Logue: The Setting Has Appeal Even Without Batman

How Did John Cena Feel About a Heel Turn During His Prime WWE Years?