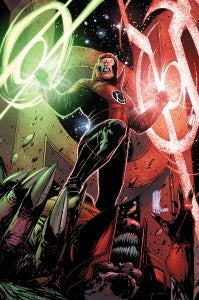 Critically-acclaimed I, Vampire writer Joshua Hale Fialkov has left Green Lantern Corps and Red Lanterns, and will be replaced by a trio of other writers on the titles, DC Comics Executive Director of Publicity confirmed this evening. "Excited to confirm Van Jensen as new writer (with Robert Venditti co-plotting) on GLC and Charles Soule as the new writer on Red Lanterns," tweeted DC's Alex Segura, after rumors broke this morning that Fialkov had left the titles. Soule will be taking over Swamp Thing after Scott Snyder leaves the title, while Venditti is taking over Green Lantern from Geoff Johns. Jensen is new blood for DC, having worked on Pinocchio, Vampire Slayer for Slave Labor Graphics. "I am no longer the writer of Green Lantern Corps and Red Lanterns for DC Comics. There were editorial decisions about the direction of the book that conflicted with the story I was hired to tell, and I felt that it was better to let DC tell their story the way they want. I'm grateful for the opportunity and I'll miss working with the entire Green Lantern team," Fialkov said in a statement on his blog. "This was not an easy decision to make emotionally or financially, but, I'm sure it was the right decision for both me, and for the Green Lantern books. The outpouring of support, your kind words and well wishes means so much to me and my family." Fialkov will head over to Marvel to work on Alpha: Big Time and his recently-announced run on Ultimate Comics Ultimates, as well as working on the Dynamite title The Devillers. It's not clear at this point whether any of Fialkov's books will see print, since only one issue of each were solicited. When Venditti and artist Renato Guedes were announced as the incoming creative team on Constantine, for instance, they didn't get an issue finished before Venditti took the Green Lantern job and had to back out. Instead, Jeff Lemire and co-writer Ray Fawkes took over to write the book for Guedes and Venditti's work (however much of it there may have been by then) never saw the light of day when Constantine #1 hit the stands today. This is the second major creative shakeup at DC Comics today, with Andy Diggle announcing earlier in the day that he would leave Action Comics before his first issue was even published.