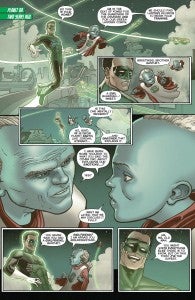 Batman's continuity has taken quite a beating since the launch of the New 52, including here at this site, because of the inexact nature of the timeline (and particularly how that timeline might be applied to Damian Wayne, Batman's son and the current Robin) -- but in spite of being almost equally confusing, Green Lantern has been given much more of a pass by most fans and critics.

This could be for any number of reasons, not least of which is that Green Lantern has made only minimal attempts on the page to clarify the complex backstory they were allowed to keep while the rest of the DC Universe was given a total face-lift. Yes, Blackest Night happened--although obviously it happened differently than we remember because Ted Kord and Kal-L never existed in the New 52. What were the nature of those changes? It's not important, and not mentioned. Fair enough.

That strategy has seemed to work for Geoff Johns pretty well; he can more or less decree that in the last five years, just about every important Green Lantern story has happened, and that any of them that don't make any sense, that's just because you're thinking too hard. And he can get away with that because, by providing very little in the way of details, it forces the fan to think himself into a continuity conflict.

As opposed to, say, Batman, who laid out a timeline for both the beginning of Bruce's Batman career and the birth of Damian and then went on to show with art on the page how those two timelines seemed to contradict one another.

So, alright--specificity is, in this case, the enemy of the kind of overall logic that The New 52 hopes to promote in Green Lantern and Batman's "un-rebooted" timelines. Fair enough.

So why would anyone let this latest tweak to Kyle Rayner's already-strained origin story go to press?

In the pre-reboot continuity, Kyle Rayner was introduced when Hal Jordan was driven mad and adopted the identity of Parallax, the cosmic parasite that had corrupted him. During the time he was insane, Jordan destroyed the central power battery, effectively dismantling the Green Lantern Corps, and the Guardians of the Galaxy appeared to have sacrificed themselves in order to give one of the few "named" Guardians, Ganthet, a final Green Lantern ring and battery--and a final shot at salvaging all they had built.

That ring, of course, went to Kyle Rayner because "you'll have to do" and over the course of a hundred-odd issues, Kyle was the only Green Lantern in the universe, trying to fill big boots with little or no guidance.

His role as the "torch bearer" became essential to his persona after the Corps was re-established, since there was suddenly so little distinguishing him from other Corps members. In the time since, that role has evolved somewhat, with Rayner adopting the identity of Ion at first (a personification of the Lantern's energy that distinguished him from other Corps members and made him a kind of Messiah for the GL Corps) and now the leader of the New Guardians, a Corps made up of one representative from each color of the emotional spectrum. He was already pointed in that direction before the reboot, but Green Lantern: New Guardians solidified it, giving only the briefest glimpse of Kyle's origin in its first issue. 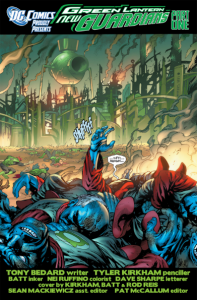 Then, this month's issue hit and suddenly there are a lot of questions raised: Kyle was personally recruited by Ganthet, but that's really all there is to him. He was a Green Lantern trained on Oa just like anybody else, and our friends at Inside Pulse point out that this may (in fact almost certainly) suggests that Hal Jordan's fall in Emerald Twilight never actually happened in the New 52.

Even though the first issue of the series certainly appeared to show a destroyed Oa in the flashbacks.

Here's the thing, though; when the universe was rebooted, DC co-publisher and longtime Green Lantern scribe Geoff Johns preserved all of the stories he had written as canon so that he could continue telling the long-term, over-arching tales he had been working on. Suddenly, though, a lot of those stories don't work without major tweaks or, in some cases, don't work at all.

If Hal was never Parallax, for example, what happened in Green Lantern: Rebirth? That's a pretty important story. The dynamic of Hal's relationship with the Corps is also drastically altered, with the "Lost Lanterns" having no reason to hate and fear him anymore. Of course, that's mostly academic since Hal has been either dead or in the thrall of Sinestro since the New 52 launched, and we haven't seen anything much of how he actually interacts with his fellow Corpsmen and the Guardians. 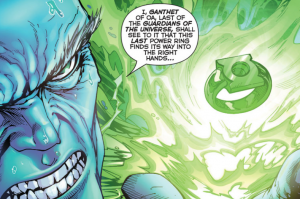 The Central Battery isn't shattered in the shot above, so the argument could just be that someone came in and killed a whole lot of folks, but Oa was back up and running by the time Ganthet got back...which could explain why Ganthet is such an outcast and the rest of the Guardians are such jerks--maybe they're impostors? But this doesn't feel like it's laying the ground for something, it has the feeling of a mistake, or of making up continuity on the fly (which has been a persistent problem with the New 52).

Especially because, as seen at left, it's not just "some folks" who were killed; Ganthet specifically mentions "this last power ring."

What else does it look like? It appears Kyle's time as a Green Lantern is something Geoff Johns would like fans to forget, but he's a popular enough character that DC has felt compelled to keep him around. This leads to a situation where a lot of his stories are either not thought out or just simply don't make a lick of sense. And early attempts to give him some semblance of his old origin by referencing his training or the girlfriend he found in the fridge one day don't make any sense when they're contradicted a year later, or the villain who put her in the fridge doesn't exist in the New 52 and no alternate explanation is ever offered.

Green Lantern, like Batman, should have been rebooted like everybody else and started from scratch. The half-measures employed on this book, seemingly for no reason other than to keep the writer happy, have led to stories that make no sense. I'm far from a continuity nut, usually going with the "as long as it kinda/sorta makes sense, just roll with it and enjoy the story" school...but first of all, not all comic book readers are. Most take their continuity pretty seriously, including Geoff Johns.

Secondly, this isn't a small matter. It seems as though the lead character in the book has had a giant chunk of his story--story established IN THE NEW 52--retconned less than two years into the new universe. And not just ANY part of his story--his origin story. And it's resulted in rewriting a period in history that has broad ramifications for the other Green Lanterns and the rest of the DC Universe at large.