, the new book by Greg Palast with graphic journalism by Ted Rall, currently sits at #1 on the Amazon best-seller list for graphic novels, toppling The Walking Dead's most recent collected edition and the second volume of the best-selling zombie survival series' massive "compendium" collections. It might seem an odd fit--the book is mostly prose, with a comic by Rall in the middle based on Palast's journalism, but Palast has been doing his best to reach out to comics audiences in advance of his next sequential art project, a graphic adaptation of his book Vultures' Picnic. In a statement, Palast told ComicBook.com,

"Comics are the new hand grenades of front-lines journalism, so it thrills me that my work with Ted Rall is Number 1 on Amazon for graphic novels.  Of course, we're non-fiction, but it's still a story. "This is my second comic book project:  my last one, Steal Back Your Vote, written with Bobby Kennedy, with brilliant comics by Ted Rall and friends, sold tens of thousands of copies in download just from our site -- and a copy is in the Native American museum in New Mexico. "Next:  A complete non-fiction novel as a series - Vultures' Picnic. While Transmet genius Darick Robertson's on board, I am planning a surprise name to work with us on the writing.  This will be the the best detective novel ever ... because it will be TRUE." 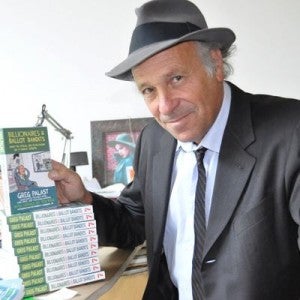 Palast's work, of course, will not show up in your local comic shop but is available through the book market, and his publisher--7 Stories Press--has some experience working with bookstores and online retailers both for prose books and even other graphic novels, most notably the recent release The Graphic Canon. It's also not likely to show up on the list for long, of course--The Walking Dead is a juggernaut both inside and out of the direct market. The fact that the book, which has been rising on the graphic novel lists for a couple of weeks, reached #1 at all is a testament to the rise of graphic journalism in general an interest in political comics with the U.S. Presidential election just around the corner. Billionaires and Ballot Bandits hits the stands tomorrow, with a full-color eBook version coming for NOOK and Kindle Fire next week. Russ Burlingame is a Senior Staff Writer for ComicBook.com and a Special Projects Editor for Palast Investigations. He advised on the comics aspect of Billionaires & Ballot Bandits.