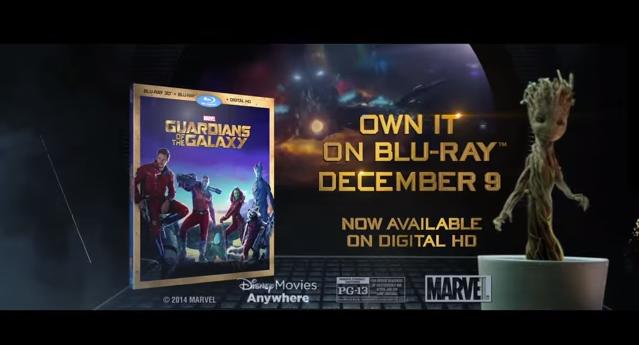 Ugh. It's been, what, six weeks since we last saw Guardians of the Galaxy? That's about six weeks too long, to be honest.

Luckily, the forces above also feel our pain. Marvel Studios has released the first TV spot for the Guardians of the Galaxy Blu-Ray and DVD release. While recutting the slam dunk of a Marvel Comics movie in a way that makes our hearts swoon to an entirely new beat, the trailer also gives a tease to Avengers: Age of Ultron first-look included on the Blu-Ray. In the brief clip, we see Thor, Scarlet Witch, and Hawkeye defend—what we're assuming is—the Avengers' foreign base from Ultron's hordes.

Guardians of the Galaxy is out on Blu-Ray and DVD December 9th. But if you can't wait that long, it is available to own on Digital HD now. Or, you could just put Awesome Mix on repeat for the next 14 days. That's worked pretty well for us so far.