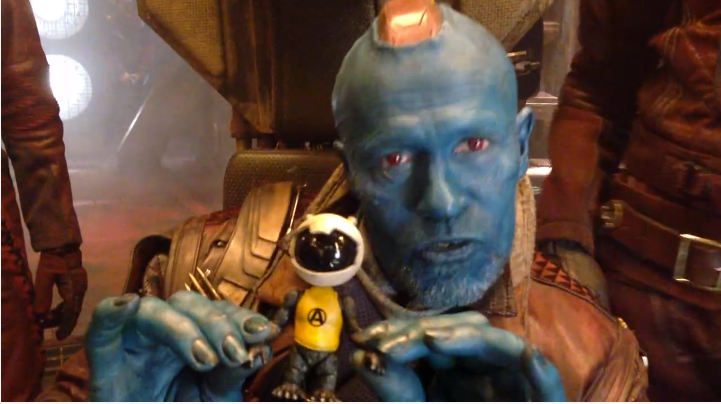 Who knew that the steely space pirate Yondu, from Guardians of The Galaxy, was actually a big softie?

James Gunn revealed a behind-the-scenes clip of Yondu actor Michael Rooker indulging Yondu's funny bone. In the clip, Rooker dances with one of the bobblehead toys that adorns his spaceship in Guardians of the Galaxy. With "Cherry Bomb," a song from the film's soundtrack, blaring in the background, Rooker an his alien bobblehead show off their moves. Judging from the music and the video's setting, it looks like the clip was shot during filming of the movie's final montage, when the Guardians Yondu's clan prepare to fight Ronan.

Gunn released the video on his Facebook as a thank you to the fans who expressed how much they enjoyed Guardians of the Galaxy, which is now available on digital platforms, upon initial and multiple viewings.

"I really did try to design the movie so there were pleasures to be found in the 2nd, 3rd, 4th viewings, and beyond!" Gunn wrote.

Guardians of the Galaxy is now available on Digital HD, and will be out on Blue-Ray and DVD December 9th.

Guardians Of The Galaxy: Michael Rooker Dancing With A Little Toy