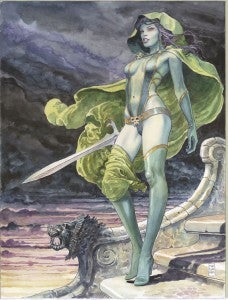 Incoming Guardians of the Galaxy writer Brian Michael Bendis surprised fans with a Marvel's Next Big Thing press conference this afternoon to discuss the cosmic superteam that everyone is wondering about. What did he have to say? That the team is "The Cosmic Avengers" and will team up with The All-New X-Men, Bendis's other team book. What else? Quite a lot, actually: "This will be the most surprising chapter of Marvel NOW! This is a brand new #1 that starts these characters off in a place for new readers but doesn't rob them of what made them great in the first place. It's also a great place for you to hop on and see why we're excited for these characters to be in a movie and why it's as good a franchise as Marvel has." "This ties into a lot of things already happening in the Marvel Universe. The things that have happened on Earth in the past few events have had a butterfly effect through the galaxy. The abuse of time travel, the use of the Infinity Gems...these things have costs." "The Guardians are the first line of defense for Earth." "If you're looking at Earth in the Marvel Universe from a distant, it looks like an insane asylum! It's a place where the Phoenix Force doesn't destroy the world, where Galactus doesn't feed. It's the scariest place anywhere to the rest of the galaxy! Wait until Earth joins the cosmic community..." 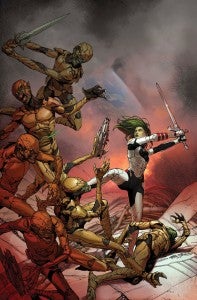 "I wrote Guardians of the Galaxy #0.1 without anybody asking me to, I love the characters so much. Starlord's origin is a hidden gem. I repeated it in a Marvel retreat and it was nice to see even guys like Dan Slott didn't know it. It's as good an origin as Spider-Man. This is why you care about this guy." "They all have father issues or are the last of their species. It's a universal thing not to like the world you're born into and not having to be a part of it." "Peter Quill's father is basically the king of the galaxy, but I'm of the belief that the guy who won the war is just the biggest [expletive]." "Every Marvel comic is science fiction on some level. As I was working this, I pulled out every sci-fi book that meant something to me on some level. I have so many that I truly love. I want to see what I was looking at and what drove me crazy; it was always the character and the artwork. That's the philosophy I applied toward this book." "Steve McNiven wanted to come in and design everything. Not just the costumes, but the ship, the worlds. I'm a big fan of alien worlds actually looking like people live in them, not like sets. These worlds look lived in, they look like everything works." "The threat of the first arc is that the Spartax Empire is an empire of conquerors, and the Earth is the sexiest jewel in the galaxy. There will be a lot of complicated plays for Earth, you can't just come in and invade it if Galactus, the Phoenix and the Skrulls couldn't do it. They have to be smart. That includes manipulating Starlord and the Guardians into a place where they won't be an issue." 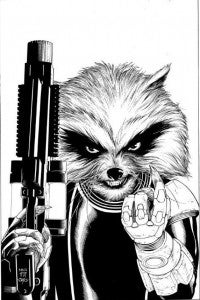 "When you see what's coming to the book in its second arc, you will be shocked. The fallout from Age of Ultron lands directly in this book." "Even though Groot only ever says 'I am Groot,' somebody will write or tweet me that 'Groot wouldn't say that.'" "There are levels worth pursuing with Drax and Rocket Raccoon beyond even where DnA went. The legend of being the most dangerous killer in the universe weighs heavy on Drax." "You mention Rocket Raccoon and people ask what you're doing. You show them and they think he's pretty cool." "Iron Man joins the team right from the get go, which is exciting and show that the Guardians are really the cosmic Avengers." "The Guardians will be out in space a lot, but there's something about them trying to protect the Earth but not belonging here and needing to understand it. Earth is in the first two issues." "Iron Man wasn't even on my list of characters I could get for this book until Kieron Gillen brought it up at our last retreat." "They start the book as a team, but we will explore how they got together and why they stick together. Most of them have nothing outside of this team." "What I like about the Guardians is that they don't answer to anybody. That makes them very dangerous and very cool." "The team that you are seeing now are not the whole team." "A lot of the ideas Jeph [Loeb] and I came up with came about when we were working on the Ultimate Spider-Man show. I wrote a Guardians of the Galaxy episode coming up in the second season." "Marvel Studios has been developing the Guardians movie for years. I was not the most focused member of the Creative Committee on these characters, but looking at them with eyes wide open and became so excited. When it came time to think about putting this book out, they called me because I sounded like a mental patient talking about the possibilities of Peter Quill." "Hell yes there could be a threat ascending to cosmic level. There will be seemingly minor characters who become big. I'm trying to do something with the Badoon and getting into stuff about Asgard spinning out of Jason Aaron's Thor." "A crossover with the X-Men is absolutely going to happen. The All-New X-Men have a lot to answer for. You know who's not excited for Jean Grey to be back? Everybody who saw her as Dark Phoenix." "These characters were, to me, the most emotionally connected and the ones Peter could count on the most. You can agree with me or not." "I cannot express enough to you how grateful I am for the work DnA, Keith Giffen and various artists did bringing these characters from nothing. I was on Avengers thinking everything they did was so cool. I would never dream of touching any of it until they were well done with their epic." "The Guardians' involvement in events will depend on who is writing those events. I always looked for a place to organically fit the Avengers in, which was easy. I know from what's coming in the next couple of years, and the Guardians will fit in. I thought what DnA did during Secret Invasion made that event more epic, so hopefully we can do that. Again, the fallout from Age of Ultron to Guardians is insane."

Guardians of the Galaxy Writer Bendis: "As Good a Franchise as Marvel Has"

Did Persona 5 Royal for Nintendo Switch and PC Just Leak?

The Rock Loved Current WWE Superstar's Imitation of Him