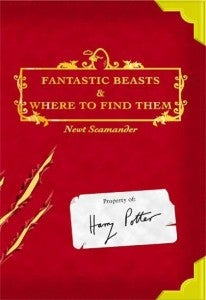 Warner Bros. shocked fans of J.K. Rowling's best-selling Harry Potter series of novels last week when they announced a new series of films spinning out of the Wizarding World will be coming to theaters--the first of which will have a screenplay from Rowling herself.

Fantastic Beasts and Where to Find Them, which takes its title from a book within the Potter books, is coming soon and, while so far details are scarce, a couple of little stories have popped up over the last day or two which shed a modicum of light on the production.

First of all, in a conversation with HitFix, Harry Potter franchise star Daniel Radcliffe confirmed what everyone already knew: He won't be coming back as Harry for this film.

Radcliffe confirmed for the site that he "won't be involved" in the planned film series and doesn't think co-stars Rupert Grint and Emma Watson will, either. "I don't know if any of us will be" [returning], he explained. "I know nothing about it."

One of the only ones who does know anything, it seems, is J.K. Rowling, and it will be her script that gets made or not, it seems. The Hollywood Reporter suggests that she's insisted on and been granted nearly-unprecedented creative control.

"Sources say Warners cannot hire someone else to rewrite her script without her approval – a gamble for the studio and a departure from the Potter films, which were written by such seasoned scribes as Steve Kloves and Michael Goldenberg. Rowling also has script approval on subsequent Fantastic Beasts films," the report says.

A gamble, maybe, but also almost certainly a selling point among fans worried her material wouldn't be treated well.

Harry Potter Spinoff: New Details For Fantastic Beasts And Where to Find Them