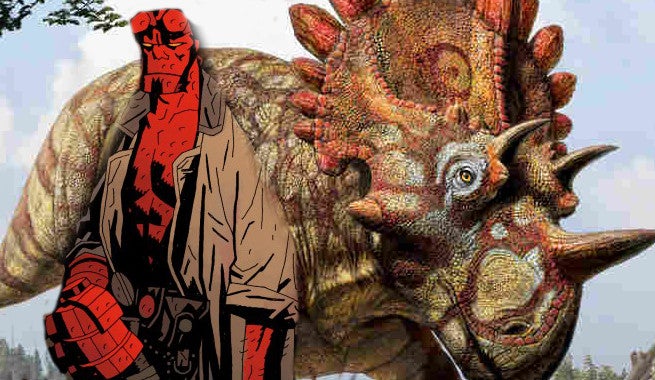 A new dinosaur discovery took the world by storm this week when scientists introduced a long lost reptile with the name of one comic's most iconic characters, Hellboy. So naturally, we had to see what Hellboy creator Mike Mignola had to say about the Hellboy Dinosaur--or "Regaliceratops peterhewsi," whether or not we'll see the dinosaur pop up in Hellboy comics, and where this prehistoric tribute stands among the rest of pop culture's.

Where were you when you heard the news? Does someone call you up and say "Hi there, Mr. Mignola, we just wanted to let you know we're naming a dinosaur after your creation?"

[Laughs] For starters I'm glad it was a Triceratops. To answer your question though, I found it out like most of you found out, Facebook.

So when will the dinosaur show up in the Hellboy comics?

I can draw pretty much anything roaming around down in hell, but I couldn't just stick that thing in there. It wouldn't make much sense or fit with the story.

But down the line? I think just for fun I should take a stab at drawing this thing. I could put Hellboy on its back or something. That'd be a riot.

Where does the dinosaur rank among pop culture's other Hellboy references?

I've got to be honest, this and Hellboy as a question on Jeopardy are pretty high on the list.

Are you ever surprised when things like this happen?

There are things that pop up in the real world that are so far outside our little comic world. Any time something like this surfaces, its strange. Flattering of course, but strange. Like, there was one movie where a character's pet lizard was named Hellboy, and I'm sitting in my chair thinking, "No way, what are the chances?" It could be a pure coincidence right? To even think that it might be related is fun.

One of my other favorites moments was when I was still watching ER. There were kids reading comics, and one kid had a Goon comic in his hand. So at that moment, I'm thinking, "Oh come on, why couldn't they use Hellboy?" But then another kid in the scene says, "Hey! You're reading the Goon," the other kid responds with "Yeah, it's because Hellboy was sold out."

And at that moment, it's like they're turning around and talking to you while you're sitting there on the couch.

You would think that with the movie, I'd be used to the character being out there. But it's so different every time. But I was really surprised when the original article on the dinosaur stated that the name was inspired by the comic character, and not the movie version. That was pretty cool.

What do you think ComicBook.com readers? Want to see Mignola draw the dinosaur? Let us know in the comments below!

Spider-Man: No Way Home Stars Speculate On Who Timothee Chalamet Could Play In The Franchise