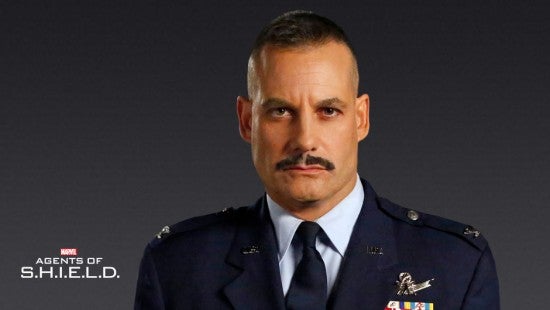 Former Heroes producer and current Marvel Television head Jeph Loeb has brought an old friend in for Marvel's Agents of S.H.I.E.L.D.; Nathan Petrelli himself, actor Adrian Pasdar, will appear on the series as Major Glenn Talbot. In the comics, Talbot first appeared in The Incredible Hulk, having been brought into the picture by Thunderbolt Ross to investigate suspicious behavior by Bruce Banner. Given recent events in Agents of S.H.I.E.L.D., don't be surprised if he's here on TV for similar reasons. "I got a call from my good friend, ["Marvel's Agents of S.H.I.E.L.D." Executive Producer] Jeph Loeb," Pasdar explained. "'Would you come and do this role?' and I read the character description and I thought, 'Oh man. Here it is again. The sanctimonious [jerk]. That's what they're coming to me for.' His way's the only way! I said, 'Jeph, are you trying to tell me something?' He said, 'No, not at all! Nobody can play this quite like you, but no.' So he came to me and I said yes." Pasdar added that when he told his 9-year-old son who he would be playing, his son told him that they needed to head to a local comic book store for research material and advice from one of the employees. The actor, who plays Iron Man on the animated series Marvel's Avengers Assemble, compared the two, saying that he understood the responsibility of bringing a character from the printed page to life, but since everyone has their own "version" of an iconic character, you have to make it your own, based on the source material. "I didn't want to base it on the excellent work that had come before, in Marvel's The Avengers and things like that," Pasdar said of his performance. "I just wanted to dig deep into the comics where it came from. And that's what I got to do, through the help of the good folks of Midtown Comics in New York City, I was able to bring this guy to life through a series of pictures and just the graphic imagery, the novels and the cartoons that I was able to access through their help. Really, in the end, that's what it's based on. As much as you're playing a [comic book] guy. I learned this through Iron Man, it really doesn't matter what I think about who he is because everybody has such a huge idea about what they think the guy is. You have to meet their expectations rather than define it by your own, and it's not pandering at all. It's just a little more difficult way of bringing something to life. You can't just rely on your instincts and your imagination, you have to match up with what the expectations are from the people who are hiring you and watching you."