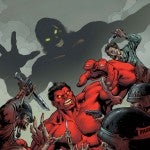 "Hulk" is hitting a landmark next month with its 50th issue.  The Marvel comic, created by the team Jeff Parker and Carlo Pagulayan, has gotten pretty solid reviews throughout the series. The 50th issue has a lot in store for Red Hulk, as he apparently is a bit banged up after his hostile encounter in Las Vegas During 'Circle of Four.'  Says Parker, "The Red Hulk didn't get out of that Venom story unscathed. "Something followed him out of hell and it's going to make the supernatural territory of Marvel break open and swallow our anti-hero whole!" On top of that, Red Hulk and Doctor Strange, Iron Man have a 'mysterious' figure waiting to attack them. "Hulk" #50 features variant covers by Walter Simonson, Arthur Adams and Humberto Ramos, along with a 10 page back up by artist Dan Brereton.  The issue hits stands April 4th. [gallery link="file" columns="2"]