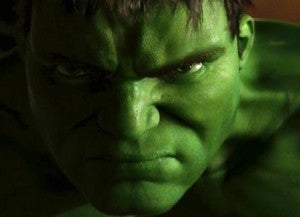 In spite of the fact that Ang Lee's Hulk is one of the most widely-panned comic book movies this side of Catwoman and arguably the worst-reviewed Marvel movie since Howard the Duck, the film's star--Eric Bana, who has also appeared in Star Trek and Munich--said in an interview published today that he has no regrets about the movie--although he's sorry for the fans upset by the unpopular iteration of Marvel's Jade Giant.

"I'm proud of what it tried to do. I apologize to all those people who were so angry about it," Bana told The Huffington Post. "I'm fascinated by the people who hated that movie and feel compelled to watch it again, which always blows my mind. But, yeah, it is what it is and I certainly don't regret doing it."

Moreover, the actor said, he's actually glad the movie didn't turn out to be a hit in some ways because if it had, his commitment to Marvel and Universal would have made other work he's done in the intervening years impossible.

I think I'm so lucky it didn't happen....One of the things I was most fearful of at the time is it being a huge success...If I had done three Hulks, it would have wiped out -- and it always takes a long time to do those movies -- so it would take six of my movies off the table."

Bana was the first actor to play the Incredible Hulk on the big screen, and after the failure of Lee's version, the franchise got a quick reboot with Edward Norton, in hopes of falling into line with the Marvel Cinematic Universe. Norton didn't, however, get to carry the role over to Marvel's The Avengers, when it was recast again.

Hulk Star Eric Bana Is Glad It Didn't Turn Out to Be a Huge Hit, Apologizes to Angry Fans

Here Are the 5 Big Star Wars Games Reportedly in Development