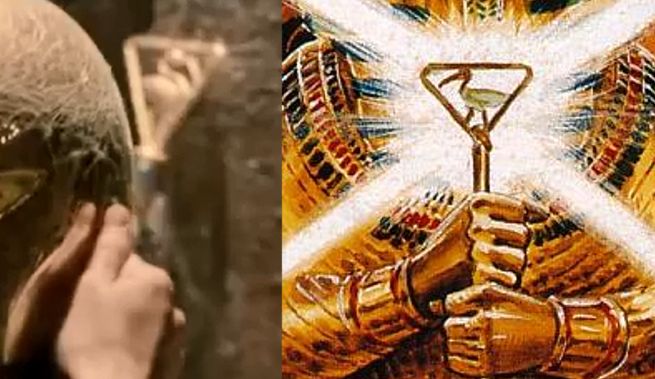 In the same international TV spot that offered viewers a glimpse of the Helmet of Fate in the upcoming Constantine pilot for NBC, a blink-and-you'll-miss-it look at the Ibistick of Ibis the Invincible also appears...ironically, in the same shot.

So...yeah. We probably shouldn't have missed that. One of our awesome commenters did, though, so thanks for that, AgedFanBoy!

What's the Ibistick? We figure it's probably worth a refresher course, since it isn't quite as widely recognizable as the Helm of Fate. 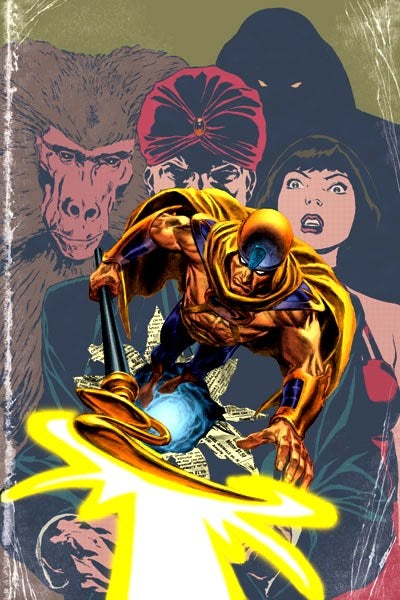 According to the DC Wiki, "The Ibistick is a magical wand with the Ibis symbol at the top. It is capable of almost any feat when used for good purposes. It would glow in presence of evil and would be ineffective against most black magic."

Ibis, like Fate, is a magical being who inhabits the bodies of ordinary people in the DC Universe.

Ibis began his life as Amentep, an ancient Egyptian price who was in love with Princess Taia of Thebes. As a young man, Amentep had been given the Ibistick by the Egyptian god Thoth, who empowers the talisman. Amentep's throne was eventually usurped by the evil Black Pharaoh, who shot Taia with a poisoned arrow. Using the Ibistick, Amentep placed his beloved in suspended animation to allow her to heal and then cast a similar spell upon himself, hoping to be present when Taia revived.

Centuries later, the mummy of Amentep returned to life in an American museum in 1940, the work of the wizard Shazam. Calling himself Ibis, Amentep set out in search of Taia, eventually finding her at another museum. Seeking to adjust to this new world, Ibis used his vast powers to become a crimefighter, operating primarily in Fawcett City and working with the Marvel Family on Earth-S in the pre-Crisis on Infinite Earths DC Universe.

The most current iteration of the character is Daniel Khalifa, an Egyptian-American teenager who is chosen by Amentep to succeed him.

In addition to the Marvel Family, Black Adam and Isis, Amentep and Ibis are connected to other supernatural DC characters like Zatanna and Black Alice.

That both the Helm of Fate and the Ibistick appear to be found by a female character (Lucy Griffith's Liv, perhaps?) in what looks to be an archaeological site of some kind is perhaps notable. Other Egyptian artifacts that power DC characters include Blue Beetle's scarab and even the elemental powers gifted to the Metamorphae, which depending on which origin you're going by can be atributed to Ammon-Ra.

It's perhaps worth noting that a number of female characters have come into contact with Egyptian artifacts over the years in DC Comics, so Liv could be a stand-in for Luri Hoshid, Professor Dan Garrett's assistant who was present when he found the Blue Beetle scarab, Shiera Sanders the Golden Age Hawkgirl, or another, less-well-known DC character.

Ibistick Of Ibis The Invincible Is Second Constantine Easter Egg