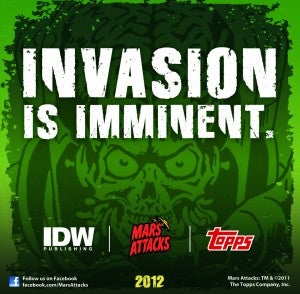 Just in time for its fiftieth anniversary, Mars Attacks will come back to comics, with a new series published by IDW in 2012.

A joint press release by IDW and Topps announced the return of Mars Attacks comics, along with what they described as high-quality reprints of some of their older material. Regular readers here may be intrigued to know that, according to Erik Larsen, one of the series Topps/IDW has the right to reproduce is Mars Attacks Savage Dragon, which he hasn't ever reprinted because, the way the licensing agreement was written, he cannot. He says that the reprint rights to Mars Attacks Image lie with Image and are not part of the IDW deal.

The property is owned by Topps and was created in 1962 as a series of trading cards. The creators were reportedly inspired to do so by a cover by legendary comics artist Wally Wood, from the EC series Weird Science. Topps used to publish comics themselves in the 1990s but like many other smaller publishers, folded when the market collapsed after the burst of the "collector's bubble." They presently make cards and other merchandise not only for professional sports but to maintain their other intellectual properties like Garbage Pail Kids. Both Mars Attacks and Garbage Pail Kids have been made into cult-favorite feature films.

“When looking for a comics partner for Mars Attacks, we wanted a publisher with the right creative sensibilities and an appreciation of our brand’s fifty-year legacy,” said Ira Friedman, Topps's Vice President, Global Licensing. “There’s no doubt that IDW will provide a great home for us. We’re looking forward to Mars Attacks complementing their existing stable of powerhouse franchises.”

Franchises, of course, like Godzilla, Ghostbusters and True Blood. It's looking like next Halloween may be a pretty cool time to be reading IDW.