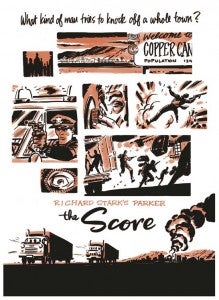 Darwyn Cooke may or may not be busy showrunning Watchmen 2 for DC Comics, but one thing's for sure, following on the heels of a Friday blog post by Chris Ryall, the Chief Creative Office and Editor-in-Chief of IDW: the veteran cartoonist will be back behind the wheel of Parker's getaway car with a new hardcover hitting in May. Following on the heels of the critically- and commercially-successful Parker original graphic novels The Hunter and The Outfit, Cooke will bring Richard Stark's famous badass back in May with Parker: The Score. A special "Martini Edition" of the first two books is available for readers who want to either get caught up on the series so far before May's release or who simply want to own the comics in the coolest available format. Otherwise, keep your eyes out for The Score.