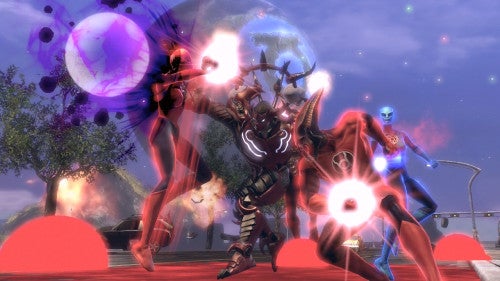 DC Universe Online, hot on the heels of its PlayStation 4 launch, is getting ready for another big update with their ninth DLC pack, “War of the Light Part I,” the first in a trilogy of DLC content inspired by Geoff Johns' popular reinvention of the Green Lantern mythos. Jens Andersen, Senior Creative Director of DC Universe Online, talked to us about what players can expect from the games' new addition.

“The main storyline involves the War of the Light showing up on planet Earth,” said Andersen. “Ranx and Mogo are in the sky, the battle is raging, and there are these mists that have appeared in the streets of Metropolis. The whole city is covered in these prismatic mists. There’s a red one, an orange one, a yellow one, an emerald one, and these mists are affecting the citizens and the people in this city, filling them with rage or fear or determination...so there's some kind of connection here between the emotional spectrum and these mists and players will be dipping their toe into a new mystery to solve over the trilogy of DLC.”

“War of the Light Part I” represents something of a new approach to DLC content for DC Universe Online, according to Andersen.

“Recently we announced that we were going to be starting new storylines with our DLC,” he said, “exploring and releasing those over a trilogy of DLC. At launch we had a lot of stories that were in the game and some of them were resolved by the time the player hit the end game and hit the level cap, and some of them continued and were left with cliffhangers. Those cliffhangers were often resolved with followup DLC. We decided that, since we resolved those storylines, we were going to be moving forward with trilogies of DLC and introducing new storylines.

“This is part one of the new Green Lantern content that we're doing,” he continued. “Its going to be introducing a brand new corps to the universe, called the Blue Lanterns. It will continue exploring and fleshing out more about the Red Lanterns, which we introduced in 'Fight For the Light,' and, of course, expanding on Sinestro and Hal Jordan with the Sinestro Corps and the Green Lantern Corps and their presence in the game. 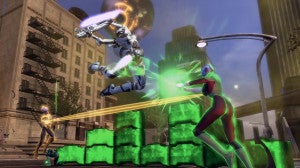 “Players are going to be able to jump into a whole new storyline. They're going to go into a re-envisioned and re-imagined version of Metropolis. They'll see, in the sky, the sentient planet of the Green Lantern Corps, Mogo, and his counterpart in the Sinestro Corps, Ranx, who've gone into Earth's orbit. You can see them up in the sky along, with various colored specks of light as the members of these different Corps are battling it out with each other. Of course, it all spills out onto the streets of Metropolis where the players get to participate in it. They're going tot have four man operations and eight man operations to go through, and those will take place in the city itself, in a shared space, so hundreds of people will be interacting with each other as they try to take part in the War of the Light on the streets of Metropolis. They'll also be going up inside the sentient city of Ranx and the planet Mogo and taking part in adventures there. Its really this massive storyline that we're kicking off here which spans so many new and familiar environments for the players to explore. Its going to be really great.”

Fans of the source material can also look forward to a bevy of new characters being added to the game, including Saint Walker and Atrocitus as playable character in Legends PvP. But there's more:

Players will also get to see some of DC's most iconic heroes and villains infused with the power of the emotional spectrum, similar to how certain characters were “deputized” during “Blackest Night.”

The new DLC will also add a new superpower to the mix; the power of Rage. 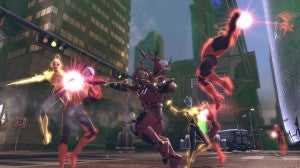 “When we added Light powers with our first DLC, we did green for heroes and yellow for villains,” said Andersen, “basically will and fear, and it allowed people to create characters inspired by Green Lanterns and Sinestro Corps agents. We're doing the same thing here, where we're creating a reservist ring which allows people to tap into the emotional spectrum with that particular color the ring is attuned to, in this case red, and it allows you to do limited constructs and things like that. We're adding a new kind of mechanic with Rage powers, called Rage Crash, and it allows characters to go into a mode where they're so angry that the more they get hit the more they get healed. In other words, the damage they take is healed right back. As long as they keep the rage building they'll be able to sustain that health level and keep going in combat. But, if that rage crashes, it will actually cause all of that health that they artificially gained through their anger to just disappear. So, you have to be really skilled in timing and your combos in order to successfully be a rage tank in our game. Or, you need to be relying on a really good healer just to save your butt if you go through rage crash.”

Players can also look forward to the addition of four new iconic gear suits, one for each of the four corps being represented in “War of the Light, Part I,” each emblazoned with that corps' symbol.

Andersen teased a bit about what players can expect to see as the “War of the Light” trilogy continues.

“Keep in mind,” he said, “that there are more corps than what we're introducing in Part I, and that there are more colored mists in the city than what I listed, and you can kind of use your imagination to see how this will continue to unfold with more iconic characters, over Part II and Part III, that might get “drafted” into those corps as well.”

In addition to “War of the Light Part I,” Andersen and his team are also working on Game Update 32. In a separate update from GU32, Armories, which allow players to switch between various character setups, quickly, during play, will be released in early 2014.

“All players will be getting one free armory,” said Andersen. “An armory allows you to save a state of your character – a build, or a template, if you will. You place the armory in your base and you can walk up to it and imprint it with the current state of your character. It will save your current styles and it will place an image of that in the armory itself, so you can actually kind of see your armors suspended there in the armory, so that you can know what it looks like and what that template was. It will also save your current selection of powers, the loadouts of those powers for both of your roles, your distribution of skill points, and all the gear that you have on as well. You can then put that armory on a hotbar that we're putting in and you can switch to it in the field. So, if you have multiple armories, you can ping back and forth between them and constantly be going between different loadouts and roles. Players will be able to have four armories per base, and they can have four bases, so the total amount of armories they can have is 16. So, even if people just want to roleplay and have a plain clothes version of their character, they can “SHAZAM!” and change over into superhero mode. Its taken us a while to get this out because we wanted to pay off on the superhero fantasy. We wanted to have that SHAZAM! Moment. We wanted to pay off on that feeling that you have when you walk into the Batcave and you see all of Bruce's different bat outfits...and its really cool to see that in your base, with your own hero or villain that you've created.”

“War of the Light Part I” and Armories are both expected to be released early in 2014, so it seems like DC Universe Online players – and especially Green Lantern fans - have a lot to look forward to in the coming year.

Interview: War of the Light Coming to DC Universe Online